We Didn't Land On Grimrock, We Fell In

The only thing you need to know about Legend Of Grimrock is that you can drag any item into the middle of the screen to throw it. That item will not slope downward, and will not stop until it hits a wall or a bad guy's nose.

The other only thing you need to know is that many walls have torches which you can pick up. You should constantly be throwing torches at everything. 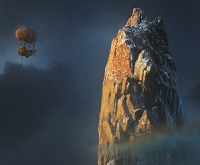 I suppose there's more that you should know. The game is a first person dungeon crawler, a genre that made a big splash in the 80s and 90s, inspired hybrid RPGs like Deus Ex and BioShock (and the criminally overlooked Vampire: Bloodlines), then all but disappeared from PC gaming. Grimrock was developed by four guys at Almost Human. They made headlines for doing decent things in an industry that tends to encourage developers to wall themselves off and act like passive-aggressive assholes.

One of the devs is an active member of our forums, and was kind enough to send along a review build of the game. As always, keep in mind that I have no idea what I'm doing. That's even more true than usual, as I've never touched a game from this genre.

The Legend Of Grimrock begins on a cheery note. Congratulations, your party of four prisoners is free! Freeze frame of everyone in the air, arms outstretched. This would make for a nice (if abrupt) ending.

Unfortunately for your ex-cons, the scene continues. As it turns out you didn't jump up in celebration, but were pushed into a pit atop an enormous mountain filled with ancient secrets and torches and skeleton men and more than a few levers. Sure, you're technically free. You just need to make your way through the innards of Mount Difficult to find the exit and gift shop.

While there is a default party, you can go through a character creation process that lets you choose classes, attributes, stats, skill points, and portraits. Unfortunately there is no Biography field, which means you can not establish that your party's parents were killed by Stormtroopers.

The most important thing? Your characters can be human, minotaur, lizards, and bug men. Bug men. Why would you not be a bug man? Don't answer that. There is no correct answer.

Movement occurs along a grid. Tapping the forward button puts you in the center of the next square almost instantly. Turning swivels your view by 90 degrees. While this almost feels turn-based the game is fully real-time, including combat. 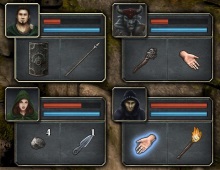 You attack by right clicking whatever happens to be in a party member's hand. Maybe it's a sword, or a bow, or a magic spell. After an attack, there's a cooldown period which encourages you to attack with another party member. For a good player this means that combat involves keeping up an attack rotation, sidestepping to avoid enemy attacks, and changing weapons/items on the fly. For me it means staying still, accidentally dropping my shield on the ground, and equipping a compass instead of attacking.

There are no shops. You scavenge your gear from dark, cobweb-strewn dungeon floors and the bodies of sentient mushrooms, and every item is appreciated. Three hours into the game you will find a pair of sweatpants with burn marks and protein stains and a missing drawstring, and you will cheer as triumphantly as you would after discovering a legendary flaming holy greatsword in another game.

It's not all combat and gear, though. In fact, most of the game is about exploration.

Early on you come across a slightly different stone on a wall. By slightly different, I mean it is exactly like all the other stones, only with a small chip in one corner. When you click that stone a secret is uncovered. From this point on, you will feel compelled to scour every pixel of every wall. Before moving on to a new floor you will linger, turning back the way you came and wondering if you missed something.

Do you like puzzles? Because, damn. Things start off easy enough. Pull a lever. Drop a stone on a pressure plate to hold a door open. Find some gems to put in a statue's eye sockets. Soon you'll be dealing with trap doors, clouds that teleport anything they come into contact with, gates that only stay open for moments, and all manner of crazy stuff that will alternately make you feel like a dumbass and the smartest person to ever get stuck in a dungeon.

Grimrock does have a story. If you're expecting a lot of dialog you'll be disappointed. Mostly the tale is your moment-to-moment experience of "I'm trying to get out of this horrible mountain and everything hates me", but a greater context is slowly introduced in some really clever ways that fit into the game world.

Is it worth picking up? If the idea of this sort of game appeals to you at all, probably. Grimrock is difficult, and atmospheric, and well-crafted. It's what I always imagined it would feel like to play Dungeon Master and Ultima Underworld, with modern sensibilities and great art design. Mostly, though, I'd say bug men.