I Squoze the Tiny Hand of Kate 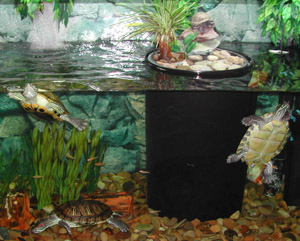 I had this girl in one of my classes, a class with William Amherst, in my college. William is my friend from high school, he met me in science class, and the first time he saw me I had my hands in the turtle tank up to the elbows, my sweater was ruined. I will tell you that story later, but not right now, I have all the time in the world. I was in science class, it was the first day, and something struck me oddly about the little castle in there, in that tank. I have a natural capacity for rearrangement. I put my arms in up to the elbows. He walked into the class and he probably wanted to know why. That might be all I remember about that story, except that the turtle was unfriendly. My sweater was ruined. The turtle poops right in there, in the water, in his own filth, my sweater of wool right there among it. I met a girl in my class in college, which would be years and years later; the present time.

William has a way with the ladies. He wears a suit, but not like a square, somehow when he wears the suit it means he has no respect for authority. For example, this is an example: he once shaved in class, with an electric razor, and the professor was too impressed, too nonplussed to accept that she noticed. She just kept talking up there with the razor going, and it made the girls love William even more. The professor even did too, she was a lady. She failed him though, but he said it was for his scruffy magnetism. He reminded her of Bruce Dern, from the mid to late seventies, and can you blame her? I remember how he used to sit next to this kid named Matty who was a square, and there was this lady who sat next to Matty on the other side, sometimes William would lean right over Matty's desk like he wasn't there and talk to the girl, with his elbows on Matty's desk. Eventually he had to leave. 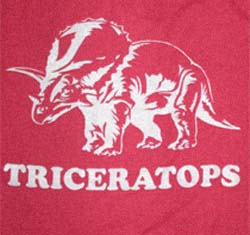 There's a girl in this class I have with William, and I told William I think she's a nice looking girl and William said I should talk to her! That is some interesting advice about women, and William would know I think. The next day, she said she liked my sweater, it is my same old sweater, you have all seen it, with the triceratops on it, which is not my favorite dinosaur but it is my favorite sweater. It is red, anyway, with a triceratops, and I am very sure you all know the one.

So I talked to her, I forget what I said, I was making conversation. I said you know, maybe we should get together and make a snowman. Or talk about Indiana. At first, I think she was not sure what to say, because my conversation topics are what you might call avant-garde? But who doesn't like to make a snowman? And there must be about a million stories about Indiana, if you look into it. And it turns out, I don't know if you know this, but it turns out that her name is Kate, so I bet she had a hard time in elementary school for obvious reasons. So she agreed to come meet with me, at the coffee place, which apparently is where people go according to William.

So I told William after class and he said well yeah, but what about her messed up hand? And I said to him that I was not aware of any such thing, but he tells me that she has a messed up hand. I maybe had not looked at her hand. She is a very nice looking girl and she liked my sweater, and not too many girls can appreciate a triceratops, and that is my favorite sweater after all, but I made it clear to her that it is NOT my favorite dinosaur, my favorite dinosaur is the one with the club on its tail. William says that her hand is very small, quite a small one, half the size of a traditional hand, and peculiarly knotted. Like a little claw hand, like the talons of an eagle? Like that. I am afraid that I am going to look at her hand too much, do you think that she will mind? The concept of a hand which is knotted and smaller than a hand, it doesn't bother me, I like her, I hadn't noticed.

So I met with her at the place and I was so happy to see her, but in the back of my mind I knew that William was concerned about her little hand. I tried not too look but I gleaned that she definitely had one big hand like a regular man and one little hand, which was knotted like the paw of a monkey. I liked her little hand but I didn't want to look too much, but I liked it. We talked a little bit, and I had looked up some information about Indiana, as promised, and there were many things about it which she hadn't known, and I was pleased with the conversation.