Tooth set off to find the huge-ass swine, not knowing what he would do when he saw it; he was still so weakened by hog shock and porcine poisons that he could barely limp his ass to the agricultural area of the fairgrounds. And in his path were many obstacles: stupid-ass white clowns; booths of poisonous Yacubian foodstuffs; regular buster-ass white people in stupid shirts. Tooth's vision began to go red. By the time he handed his ticket to the hillbilly cracker at the World's Biggest Pig exhibit, he could barely even stand.

They made the World's Biggest Pig area all dark and spooky like, right, with lots of curtains and shit, so as the white man could appreciate the false devil grandeur of their pork idol. Through the throngs of white swine-worshippers, he could see a single spotlight in the center of the tent, illuminating a tremendous pink shape. The smell of hog was palpable as he pushed his way through them assorted herbs and busters.

And lo, Tooth Tooth was face to face with the hugest swine in creation. He was almost afraid to meet its eye; he feared that staring into the black pools of a pig's gaze would immediately seize his heart, wilt his soul and rob him of all hustle that remained in his bones. Tooth fought past his fear and met the stare of the animal, and a familiar sensation washed over his body. And you ain't gonna believe the sensation to which I refer, cousin.

It could not possibly be...

Yes, cousin. At that moment, meeting the eyes of the garbage-browsing hog most emblematic of white foulness, game recognized game.

Suddenly, Tooth felt revitalized; though the pork morsel still burned in his belly, he felt the vibration of some cosmic strand that still connected him-- just barely-- to his stolen righteousness. He had enough strength in his frail body to utter a statement to all assembled white devils: "Begone, ministers of Yacub, for I seek to build awhile with this pig." And those hillbillies, sensing the profundity of a righteous man's command, scattered to the four winds and allowed Tooth the space to converse with this hog. 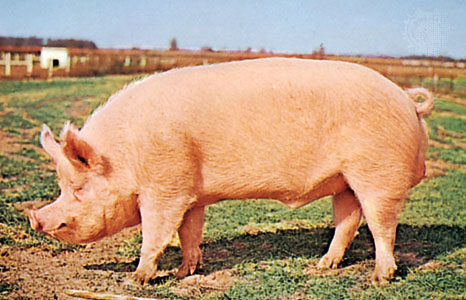 Of course, hogs can't talk, but Tooth sensed he might be able to commune with this beast in a similar manner like he could with his lost eagle. And so he continued to stare into its tiny black eyes, and with its eyes it told him the tale of its people.

"Swine are not filthy creatures by nature, Tooth Tooth. We do not favor garbage, and it does not please us to live among our filth. Nay; we have merely been brought low by the evils of Yacub's white creations; we have been bound, caged, butchered and murdered. Swine burns within the righteous man not because it is poison, but because it is evil to eat of the flesh of intelligent and sensitive creatures. When you eat the hog, you eat the sins of the murderous alabaster race."

And as the pork morsel burned inside Tooth Tooth, he knew it to be true.

"No," cried Tooth. "Too long have I been gulled by the depraved lies of the white man. Too long have I been prejudiced against the noble swine, calling them garbage-browsers, when in truth they are merely victims of Yacub's wicked progeny. I will not have the proud flesh of your swine brother inside me one second more."