How to Solve the Most Difficult Puzzles in the Witness

Give the wood plank to the ogre twin on the left. He will comment, "I cannot do anything with that item". Repeat this process a total of thirty times. On the thirtieth attempt, he will cast a magic spell upon the plank, turning it into the red keycard you need to progress. 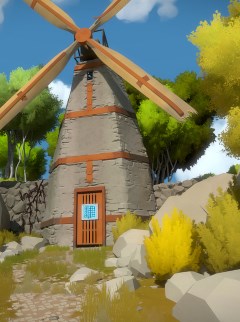 Sink fifteen basketball shots before the buzzer sounds. Watch out for the swooping mosquito clouds!

Escort the snarky hacker across the plank bridge maze. Don't walk too quickly or she'll stop in place. If her pathing causes her to fall, just reload and start the puzzle over from the beginning.

Wander around in the woods until you find a rock and enough twigs to build a crafting table. Now make an axe. Now search every container for water bottles and jerky or canned goods.

Puzzle 56 - "Meet the Man Behind the Curtain (Jonathan Blow)":

While crouching, approach the guard who is facing away from you. When you get close enough, hit the button to perform a brutal takedown.

Repeat the dance moves in the exact order they were shown.

Exhaust all dialog options until you are asked to explain what Braid was really about. Type in the correct answer in exactly 250 words to continue.

Aim the turret at your enemies and press the Right Trigger button for massive damage combos. Be careful not to hold the button down too long or the turret will overheat!

Don't move the cursor at all. Let the cutscene play. When you regain control, immediately run forward, outrunning the lava wave.

Puzzle 542 - "In Which the Hot Bikini Babe Dies in Your Arms and You Swear Revenge":

Walk down the corridor in slow motion, the rain and dramatic music emphasizing how dramatic it is that you're injured and limping towards the finale.

Puzzle 665 - "You Were Really the Island's Creator This Whole Time... But Were You Solving Puzzles of Your Own Volition or Merely Doing What You Were Told? And Are You More Machine Than Man?":

Press the corresponding buttons when the QTE prompts show up on screen. Once you have deflected all three missiles back towards Shadow Darkbane, his armor will crack and you'll move in for the kill. Quickly tap the button to parry his final sword blow and decapitate the evil lord once and for all.

The Witness
I'm just going to give this thing a high score so no one suspects I was too stupid to finish the game. 8/10

Homeworld: Deserts of Kharak
Something must be wrong with my video card, this game is called Homeworld but the outer space looks like sand and everything appears to be happening on a relatively flat plane. 7/10

Steamworld Heist
Oh, and just so everyone knows I'm not dumb at all, The Witness is important and I got the important things it was saying. 8/10