In 1966 the world was introduced to the daytime serial drama "Dark Shadows." It incorporated many familiar elements of soap operas, but what made it stand out were those elements that the series borrowed from horror films and fiction. Specters and various other supernatural entities haunted creepy Victorian environments. The show's star over its five-year run turned out to be the suave vampire Barnabas Collins. The series ended in 1971. 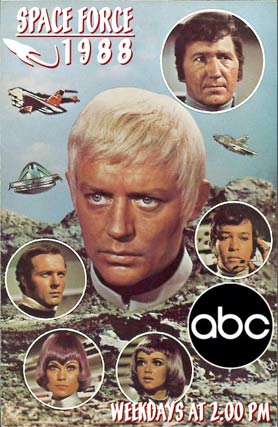 In 1973 Hute Crestwell, one of the key producers responsible for realizing the series, teamed with James and Jennifer Selwyn for a new project. Crestwell sought to revolutionize the daytime drama all over again. He envisioned an epic science fiction story, told a piece at a time, but with an emphasis on the individual lives of the characters. ABC liked the idea so much that they purchased the show's first season without even seeing a pilot.

Neither Crestwell nor the Selwyns knew a thing about science-fiction, so they hired author Vernard Shay to pen the story arcs and supervise scripting. Shay's 1971 novel To the Downward Part of Neptune" had spent several months on bestseller lists and Shay had won a Hugo Award for his short story "Roboticus is Free." Shay also achieved pop-culture recognition with his "1 Law of Robotics" which proposed a single rule to govern the behavior of all future robots and androids.

The first episode of "Space Force: 1988" aired on May 2nd, 1974. The episode was entitled "Go Forward Captain" and was penned by Vernard Shay, directed by Hute Crestwell and produced by the Selwyns. Shay and a team of writers drawn from other daytime dramas penned five episodes per week for the entire first season. 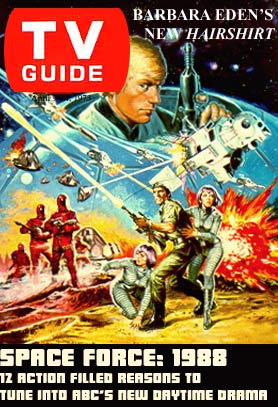 Shay's premise for "Space Force: 1988" involved a manmade ecological disaster in 1980, an alien attack in 1985, and the formation of a deep space military force similar to NATO in 1987. The titular Space Force sent suspiciously tennis-racket shaped vessels all over the galaxy searching for a new home for humanity and encountering friendly and hostile alien cultures.

One such vessel was the Star Cruiser Discovery 2 and Captain Ernest Searchwell was the commander. He and his ever-changing crew of men, women and aliens dealt with various drama and high space adventure in each episode. Storylines generally spanned a week (five episodes) although several romances and conflicts endured throughout the entire first season.

Perhaps the best-known of these season-spanning arcs was the pregnancy of Lieutenant Tivok, the ship's Cremeuling science officer. In episode 114 Tivok had an affair with Lieutenant 00023, the ship's mechadroid, while under the influence of a dangerous substance. 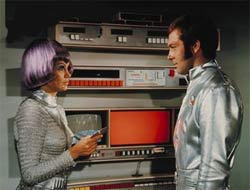 LIEUTENANT TIVOK sits with ENSIGN HARPER and ENSIGN RILEY. She is a CREMEULING in a silver space suit. The men wear flare-bottomed unitards and rank hats.

LT. TIVOK
I am investigating illegal activity on the ship and I have been told that you two might be involved.

ENSIGN HARPER
Illegal? What? We are junior officers of Space Force!

ENSIGN RILEY
Ma’am, we would never do such a thing.

LT. TIVOK
It does defy all logic, nevertheless, you humans can be very illogical.

ENSIGN HARPER
Hey, relax baby. Why not have a cigarette with us?

LT. TIVOK
I only smoke Virginia Slims for their rich Turkish tobacco flavor and refreshing menthol.

ENSIGN RILEY
These cigarettes are even better than the crisp cool taste of Virginia Slims.

LT. TIVOK
That seems impossible, but I will try your cigarette.

LT. TIVOK takes a hand-rolled greenweed cigarette from ENSIGN HARPER. She lights it and puffs. Green smoke emerges and she begins coughing.

ENSIGN KELLY
Take another puff on that Mary X and let’s get crazy.

LT. TIVOK
Yes, this is far out.

LT. TIVOK lets down her purple hair and stands on a table to dance as a SITAR BAND begins to play in the ship’s lounge.

00023, who could be described as a snowman made out of overturned mop buckets painted gold, was the only member of the crew immune to the effects of "Mary X." After impregnating Lt. Tivok with a cyborgdroid infant, he saved the crew from death by laziness.

The brutal shooting schedule and low per-episode budget forced constant compromises on the scale of the science fiction elements. Special effects were often shot using items found lying around the soundstages and even these cheap sequences were generally reused 10-12 times each over the course of the first season. The best example of the overall cheapness was the 20 episode arc that saw several crewmembers transported to 1974 New Jersey after they touched a crystal. 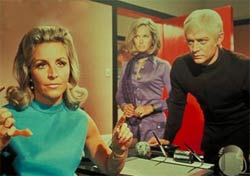 CAPTAIN SEARCHWELL, LT. TIVOK, ENSIGN RILEY and ENGINEER BUGGOCK phase into existence on a filthy street corner in New Jersey. A newspaper blows past and it reads “IT’S 1974!” as the main headline. Cars and barrels burn in the streets and several PUNKS in leather jackets are disco dancing.

CAPTAIN SEARCHWELL
That crystal! Where has it taken us?

LT. TIVOK
Based on that paperine computer wafer I believe it is 1974 and we are somewhere called ‘New Jersey.’

ENSIGN KELLY
I’ve heard of that place. It was one of the most dangerous colonies of Old Earth.

ENGINEER BUGGOCK
How can that be?! We were in the year 1988 in the Gaxomiconus Quadrant only seconds-

The PUNKS and the PUNK LEADER approach the away team.

PUNK LEADER
You cats are far out, but you’re on our street corner. Get lost or you’re gonna be history!

CAPTAIN SEARCHWELL
Greetings earthman, we have been brought here against our will. Might you direct us to the nearest Space Force office

PUNK LEADER
I can direct your eyes to this knife, my main man.

PUNK LEADER (CONT'D)
Now hand over your wallets and beat it or there’s gonna be trouble.

LT. TIVOK
I can handle this, Captain.

LT. TIVOK executes a perfect CREMEULING NOSE PULL and renders the PUNK LEADER unconcious. The PUNKS yell and run away.

The visual of the crew touching the crystal and being transported somewhere else was later reused to great effect in episode 199. After touching the crystal featured in this episode, the crew switched bodies. This happened several times throughout the course of the episode until, by the last few pages, it became impossible for the actors to distinguish which character they were supposed to be portraying. Several of them collapsed during filming from mental and emotional exhaustion. 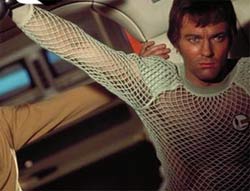 ENSIGN RILEY’S BODY
Oh no, what have you done O’MALTY?

VICE NAVIGATOR JOHANNSON’S BODY
No, I’m O’MALTY, I don’t know who that was.

Only two episodes followed episode 199. Episode 200, "Deal the Deck," saw the crew returned to their proper bodies with the caveat that Captain Searchwell had somehow become pregnant with the cyborgdroid baby that had previously been inside Lieutenant Tivok. Aware that dreadful ratings had put the show on the brink of cancellation, Crestwell and Shay attempted to turn the season's final episode into an intellectual and visual feast.

Episode 201 ("The Human Circle") saw Shay and Crestwell making a clumsy attempt at recreating many of the themes of "2001: A Space Odyssey." While few can recall the details of the convoluted plot, the unintentionally horrific ending lives on in the memory of those who witnessed it. Discovery 2 is destroyed by a star dragon and Captain Searchwell, the sole survivor, is adrift in a rescue capsule. He is taken on a journey through his subconscious by a hovering rubber fetus that is presumably a hallucination. This journey ends with Captain Searchwell dying as he gives birth to himself inside the rescue capsule.