Bundle Up, June is the Start of Nuclear Winter!

Remember this? THIS IS BAD.When I woke up this morning, it seemed like any other day. Normal early morning depression, normal unidentifiable taste in my mouth from the previous night, normal unidentifiable person lying next to me (of unidentifiable gender). Outside, the sun was shining and everything just seemed like it always does. It was just an average day...average, that is, until I saw my newspaper. Suddenly, my whole world went turned topsy-turvy, as it seems to do every now and then when something shocking happens. It turned out that there was conflict in, of all places, the Middle East! This came much to my chagrin, as I'd previously thought very highly of the Middle East, and showed my support by trading limited edition Middle East collector cards and wearing basketball Jersies with the word "Jordan" emblazoned on the back. World renowned for its sanity and well thought out ideas, this region was a virtual Mecca for me. Alas, to my dismay, this idealistic image was shattered by the story on the page in black and white. It was as if I saw the Fonz at a Star Trek convention, or Archie Bunker having gay sex with a black man. If nothing else, this thought showed me that I've been watching far too much TV Land, and far too little news programming.

As you probably know, Pakistan and India are on the brink of nuclear war. What you probably don't realize however, is that Pakistan and India are on the brink of NUCLEAR FUCKING WAR! Besides media outlets, it seems to me that nobody is all that worried. Granted, the combined nuclear arsenal of Pakistan and India are about equal in magnitude to a large fireworks display, but it still is a cause for concern. It may be unlikely, but there's still a chance that every single person on Earth will be exploded into base pairs of DNA and molecules smaller than the size of a penny! Especially susceptible are the people you love and admire most, such as your Mother or STD laden former athlete Joe Namoth. And yet, as a whole, people are so desensitized to the whole idea of explosions and molecules that they barely even stop to think about how this could effect the world. Why, right now as I type this sentence, I could have easily been eradicated by a thermo-nuclear device. As you're reading this next sentence, who's to say that I haven't been? Also, in case I have been vaporized by the time you read this: BOO! That's a little ghost humor! Don't worry if you didn't laugh, it'll seem funnier when you're dead. Which may be soon if India and Pakistan go at it!

What could drive these two nations to such extreme measures? Surprisingly little! Ever since the two countries were liberated after World War II, they've been disputing a tiny hunk of land known as the city of Kashmir. While I'm not exactly clear on the specific details, I believe that Kashmir is valued by both sides because hey, why not? Clever deception like that may hide my personal ignorance of the situation pretty well, but the one thing it doesn't hide is the fact that my ignorance is unfortunately typical of people regarding this situation. Not a whole lot of folks really know what these countries are fighting over, or what could really happen if they do in fact go to war. Nobody seems very phased at all, with most being very passe about the potential instantaneous melting of several million people. Even as our own Government evacuates all of our citizens from these countries, people are still content to sit back and not spend their life savings on lifesaving bomb shelters and gas masks and atom repellant. Let's take a look at a time line of what just might happen if a bomb were to drop... 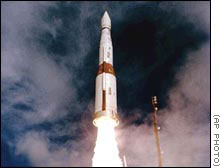 India, launching an attack on Pakistan's secret moon base.Back in the good old days, we were always prepared for a nuclear war. We had our mortal enemy, the Soviets, breathing atomic fumes down our neck at regular intervals. Led by the charismatic Red Skull, the Soviet Union would delight in making us Americans think that all hell was going to break loose at any moment. It wasn't much of a surprise to be threatened with nuclear annihilation, but we were always ready. Students were taught the proper way to hide under their desks during bomb droppings to ensure maximum safety from the explosions which had roughly 100 megatons of power. Nowadays, average students may foolishly think that their desk provides no shelter at all! Everyone knew just where the nearest fallout shelter was, and exactly how to get to it in case of an emergency, such as the need to create a hilarious situation like in the Brendan Frasier film "Blast From the Past." Unfortunately, "Blast From the Past" is at the very bottom of our list of worries now, while "Blast from the city of Kashmir" suddenly finds itself ranking among the top three.

This situation has the potential to be the worst Nuclear disaster since that crappy villain in Superman IV. We have to start wising up and taking action, like those really awesome Kryptonian villains in Superman II. Our government needs to step up its campaign to get these two nations friendly again. Set up a romantic candle lit dinner, maybe a few roses, some wine...before these two "Enemies" know it, they'll be in bed rolling around as lewdly as can be. That, or we can just go in and blow up both countries ourselves, because two wrongs always make a right. Still, with our current Government, I'm not sure if we're going to actually have any influence on the goings-on. George W may be good for pure wacky fun, but he lacks the basic motor functions and coordination required to push the buttons on the white house control panel marked "Blow up stuff " and "Make peace." We need someone who can take action. If America had a leader like George Washington or Adolph Hitler, you can bet this situation would've been rectified long ago.

Word on the street has it that, due to increasing pressure from world governments, both India and Pakistan may pussy out and go back to their sissy bitch name calling. Pakistan has offered to hold talks to end the current standoff, and to possibly arrange a later date at which to start a new one. India, however, is being a little standoffish, and for now there are no peace talks. It hurts my brain to think about the possibility of a real Nuclear War, but at least I'm getting myself prepared. A reassuring thought may be held in the fact that if they hold off on this war for just a little over a month, we may get to see the biggest, sweetest Fouth of July display ever conceived! Won't that just be swell?