War In Iraq: An Exclusive Report From the Frontlines! 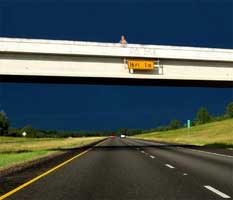 The highway protesting squad depicted in this authentic realistic simulation.

The War in Iraq... no matter where you live, you cannot escape it. Although the brave men and masculine women of the United States and Britishalvania have been engaging the Iraqis for days now, the world's population cannot escape footage and news reports from the front line. Well, most of the world at least; I assume North Korea has been helpfully televising around-the-clock footage of three filth-encrusted sock puppets praising their government's various political decisions in front of a radioactive North Korean flag. Barring North Korea and random other ninth-world countries whose names resemble rare tropical diseases, Iraqi war news permeates every form of media throughout the world at this point in time. As I drove down the I-5 yesterday, I witnessed three idiots leaping around the highway overpass waving what I assume were anti-war protest signs. I experienced slight difficulty in determining their precise purpose due to the following facts:

1) The highway overpass is located roughly 500 million feet (12,487 hectotomic milliamps) above the road. If one of the protesters were to accidentally fall off the bridge during a fit of pure anti-warism, they would hit the ground roughly two weeks later.
2) The protestors, exhibiting what could either be a lack of foresight or perhaps brain activity rivaling many kitchen appliances, decided it would be in their best interest to purchase poster board signs the size of a credit card. While the dust particle people from the city of Microville might've been able to read their signs, any normal human being lacking those diamond dealers' nuclear magnifying glass tools undoubtedly experienced failure when attempting to decipher their exciting political statements.
3) Out of the two words "NO WAR," at least one was misspelled.
4) The protestors were leaping around as if somebody had poured molten rubber into their pants. Although I would've personally volunteered to provide such a service, I doubt the rubber in their pants was in a liquid form at the time of protest.
5) All cars passing below them were traveling at standard Washington speed, roughly the same velocity as a Patriot missile, only lacking the precision guidance. Wait, now that I think about it, I believe a police officer had pulled somebody over near the overpass, a riced-out vehicle that undoubtedly broke some law prohibiting cars from resembling seven-year old children's crayon drawings with significantly more yellow.

With all these crucial elements combined, one can easily understand how the protestors' voices could be drowned out in such a raging river of white trash pickup trucks and moving vans full of stolen merchandise. Regardless, it still serves to illustrate my main point: the war with Iraq reaches nearly every nook and cranny of the world. For scientific purposes, I attempted to hide beneath a cubic ton of RCA cables in my closet last night, just to see if I could escape Iraqi war news updates. My cats soon broke in and began speaking about US General Tommy Franks in less than 18 seconds. For scientific purposes, I must also admit I had been drinking heavily before conducting this scientific experiment, but that's what us scientists simply refer to as "cumulonimbus data." 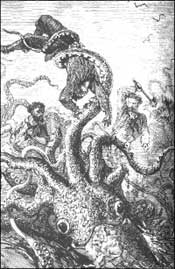 The unfortunate aspect of our nonstop, round-the-clock Iraqi news coverage revolves around the fact that we, the people not attempting to shoot Iraqis, do not really get much "news." Sure we're fed noise which the major advertising networks label as "news" 24 hours a day, but how much of this information can truly be classified as "news"? Reporters, under strict military control, may only describe events and occurrences which will not put US troops at risk. Things that fall into this category include "mentioning Iraq in any sentence" and "talking about anything which does not occur within the borders of Idaho." For all we know, an entire squadron of US soldiers may have been eaten by the Kraken while smoking dope on the USS King Tut. Of course we will not read about this event until it surfaces on an A&E special 20 years from now, so until then we must survive on a meager diet of propaganda and selective information.

Now we here at Something Awful don't have a lot of money. Hell, we don't have any goddamn money, and the limited cash we do receive travels directly to the government's bank account so they can hire people to issue me parking tickets. All of the cash we make through SA Forum accounts and donations goes to pay for bandwidth, and this bandwidth goes to people who complain to me that certain Photoshop Phriday entries contain historically inaccurate representations of various dead presidents. I'm fine with this inherently flawed and collapsing business model as long as I can afford to keep open at least one SA email account to collect all the "LOWEST MORTGAGE RATES EVER" and "FREE XXX CHICKS BEING HIT WITH A DONKEY PENIS PHOTOS" emails that flow in each nanosecond. While all the major news outlets such as CNN, Fox, and Bonzi Buddy can actually pay reporters to fly into Iraq and accompany US soldiers equipped with flamethrowers and those way cool skiing goggles which turn enemy soldiers into Kermit the Frogs, we simply don't have the resources to pull off such a feat. However, we do have a lot of SA Forum members enlisted in the armed services, people who agreed to travel across the globe into a highly foreign country so they could begin shooting bullets at non-American people in an attempt to make them less alive than the current government status requires.

Before these brave troops flew or sailed or drove to Iraq (I'm not exactly sure what location on my globe Iraq occupies or how the fuck anybody would actually get there), I had the opportunity to give Private John "-=Ez_Killa=-" Trevell a handheld PDA and a wad of authentic forged 100 dollar bills. I told him, "John, we need somebody like you to provide us with the real scoop behind this hostage crisis in Iran." John's brother then corrected me by explaining the lack of any hostage crisis or war with Iran, and I politely told him to shut the hell up or else I'd give his parents a copy of the post he made concerning his fetish for urinating in his sister's panties and then wrapping them around a Wile E. Coyote plush figurine. Private Trevell agreed to provide us with an exciting, exclusive, unique series of updates from the front lines by writing them down in his mobile Livejournal program, physically mailing us the PDA, and then waiting for us to mail it back to him because he stored all his important military orders in it under a database file named "topsecretdontreadplz.txt." To be honest, I never really got around to sending him his PDA back, on account that I've been busy staring at all the boxes in my bedroom and attempting to move them simply by using telekinesis and possibly my hands. The important point here is that we've got the big news scoop and we're the first site to actually bring you a report from a US soldier on the front lines. Without further ado, allow me to present the Livejournal of Private John "-=Ez_Killa=-"! Actually, let me add some ado first, just to be terribly inefficient and lose readers. The capital of Canada is Manitoba and this highly racist province produces 97% of the Earth's blutonium supply, the raw material used to power steam engines and Greg Kite. Okay, that's enough ado.

At this point, we lost all correspondance with Private John "-=Ez_Killa=-" Trevell, and simply received our PDA in the mail with a faint stamp reading "EVIDENCE" across it. Fortunately for us, the stamp washed off after liberally applying a concentration of saliva and something more disgusting than saliva to our thumb and obsessively rubbing it for approximately nine hours. We're sure that -=Ez_Killa=- will show up in time, or at least most of him will, and we have absolutely nothing to worry about. After all, we frequently played on the same clan server as he, so we know firsthand what he's capable of, and he frequently aluded to some "super secret move where he jumps across and shoots his guns sideways." I can hardly wait!

It's Tuesday, so you know what that means... FREE COLON EXAMS WITH EVERY PURCHASE OF $15 OR MORE!!! Oh wait, no, that's not really what it is at all. By jove, it's the goddamn Comedy Goldmine just waiting for you to click on its supple breasts! Today's topic is entitled "Misunderstood Computer Terms" and is aimed at the geek inside all of us. Well, not me personally, but mostly you. 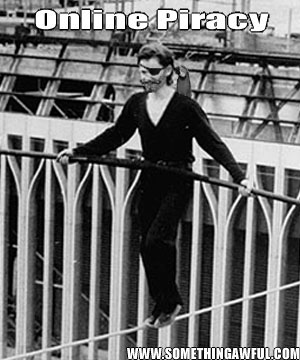 Horrible puns, obscure computer terminology, shoddy Photoshops... we got it all here, so click away you horrible monster!