NARRATOR: What sets War Craft apart from other video games are the official discussion zones, also known as "forums", where players can discuss the events of Azeroth and interact with the game's developers. Jonathan, who goes by the name Melian on the forums, finds the discussion on how the patch affects his character class, known as The Druid.

NARRATOR: He immediately registers his disgust about the new patch.

NARRATOR: The game of World of War Craft is only half the story. The game is so popular that players sometimes have to wait up to 2 hours to enter what are known as "player vs. player battlegrounds", ironic considering the often boasted limitless vastness of the web. While Jonathan waits his turn he engages in a spirited discussion about his experiences with the game on a second computer designed for just such a purpose.

JOHNATHAN MALFOY, biting into his sandwich: I've had it up to here with Blizzard's mishandling of my class!

NARRATOR: Jonathan, or Melian as he is better known, is exhibiting a behavior known as nerd rage.

DAVID MILLER, Director of Internet Aggression Research, Univ. of California, Irvine: Nerd rage is the intense overreaction to things that upset you over the Internet, usually related to video games and computers that, at the end of day really don't matter.

NARRATOR: David Miller is the leading researcher of net aggression in the country. He's been studying nerd rage at the University of California in Irvine for over 15 years. 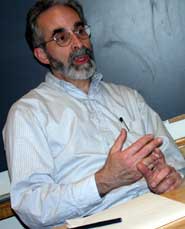 DAVID MILLER, Director of Internet Aggression Research, Univ. of California, Irvine: It isn't just enough to be angry. You have to exhibit an elitist attitude towards anyone you perceive has wronged you. Everybody is horrible at their job except for you. You know how everything should run, and if they just would listen to you, everything would be perfect. That's what goes through these guy's brains.

NARRATOR: At one point Jonathan becomes so angry that he threatens to cancel his World of War Craft subscription, valued at around 15 dollars per month.

JOHNATHAN MALFOY: There are other companies that deserve my hard-earned dollars more than Blizzard ever did. Has Sony fixed Everquest 2 yet? Heh, I doubt it considering how incompetent S.O.E. is. But after this insulting patch I'm taking my money elsewhere.

DAVID MILLER, Director of Internet Aggression Research, Univ. of California, Irvine: They always threaten to cancel. Every single time. It's an extension of their massive egos. They believe their presence is so important to this virtual world that leaving would somehow be detrimental to the game.