A Conversation in the Hall at Hubricon Amalgamated 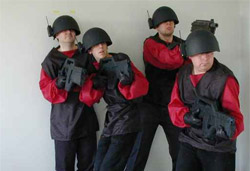 We may not be the most fit unit at Hubricon."What's in there?" Gary Blunt nodded his head in the direction of the double blast door.

"Oh, I'm not sure," I replied. "You know, they don't really tell us much of anything around here."

"Nope, missed it, but I TiVoed it so don't tell me who won. I've been avoiding talking to people all day."

I chuckled and adjusted the balance of the assault rifle I was holding to my shoulder.'

"It was a good game," I began and caught a glare from Blunt in my peripheral vision. "I'll leave it at that."

"Thank Christ," he muttered and the conversation lapsed into silence.

After several minutes I was going to ask Blunt if he'd seen the redhead that had just started working the main entrance. I opened my mouth to speak and was cut off by a deep basso rumble that came from behind the double blast door. It was a sinister growl, as powerful as an engine but seemingly organic in nature.

"What the hell was that?" Blunt wondered aloud.

"No frigging idea," I glanced at the door just to make sure it was still there.

"Good benefits," I reminded him.

"Just once I want to know what the hell we're guarding."

"There's a security terminal over there," I pointed down the hall to an alcove containing a computer terminal.

"Are you kidding?" He snorted. "My clearance isn't good enough to get me tomorrow's cafeteria menu."

"What? He CC-ed me on some stupid joke forward. Something about 101 golf jokes."

Blunt shrugged and walked over to the terminal. He was a hunt and pecker on the keyboard. Frigging annoying.

"Mistress, appropriately enough. I overheard him telling one of the other docs about how she'd given him the only good hand job he'd ever had."

"Yeah," I grimaced, "I'm guessing giving him a hand job would be like jacking off a raisin." 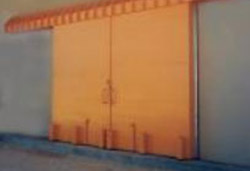 The blast doors seemed sturdy."You would think about that, homo."

Blunt laughed and finished punching the keys. His efforts were rewarded with a pleased beep from the computer.

He worked silently for several minutes.

"Uh," he said hesitantly, "the ah…hang on, you're not going to believe this."

Blunt fussed with the shitty dot matrix printer and then watched as it began to rattle out pages of information. When it was finished he tore three sheets off the roll and returned to his post. He handed me the sheets of paper. I skimmed them quickly and then had to start over at the beginning because I couldn't believe what I was reading.

"A cloned dinosaur!?" I looked at Blunt in disbelief.

I read to the bottom of the first page.

"A dead cloned dinosaur?" My brow furrowed. "Injections of NS42. Necropin. What the hell is all this crap?"

"It's a zombie dinosaur. They brought it back to life."

I turned to the second page and was greeted with a grainy image of the undead dinosaur. Its lifeless eyes stared back at me. It seemed to be holding a human spinal column in its mouth.

"On the third page," Blunt continued, "they talk about injecting it with the 'super soldier serum' and there's a graph for its growth."

I flipped to the third page.

"It's says It's almost fifty feet tall. How is any of this poss-"

Another deep groan emerged from beyond the double blast door. The sound was so loud that I covered my ears and felt a painful vibration in my internal organs.

"I think I'm beginning to understand all of those protestors at the main gate every morning," Blunt remarked as the last echoes of the bestial groan died away.

"Yeah," I smirked with gallows humor. "I'm pretty sure the company we work for is evil." 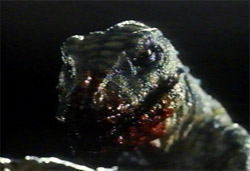 I fear this company may have an unpleasant agenda."Eh," he was, incredibly, unconvinced of the idea. "Companies do all kinds of gray area stuff. Maybe they're doing this to try to cure those babies with their hearts on the outside of their bodies. The ends justify the means."

"Oh, so you're saying that cloning a dinosaur from a fossil, killing it, bringing it back to life and then injecting it with a super soldier serum is justified if they can put the heart back inside one baby?"

"That was just a hypothetical. You know, maybe it can cure cancer or AIDS or something."

"For all we know it causes cancer or AIDS or something."

"Now what's the sense in that?" Blunt shook his head. "That would be ludicrous."

The conversation lapsed again. Instinctively we fell back into our guard positions at the door and contemplated this new revelation in silence.

After a few minutes the creature groaned again, more insistent this time. There was a loud scraping at the double blast door.

"Wouldn't it be poetic justice if that thing busted out of there and killed all of them?" My question was rhetorical.

"It would teach them a lesson," Blunt agreed. "Not to mess around with nature and all that."

"I still say the company is evil."

"You say that," he scolded, "but what about Agnes in the cafeteria? What about Big Bill in HR? What about that hot redhead who just started at the main entrance? What about us? Are we evil?"

"I guess you're right," I said and fell silent.

The weight of my assault rifle began to feel like a great burden. I was beginning to sweat and my mood was not being helped by the constant screeching of giant raptor claws on the thick metal of the double blast door. I glanced over at Blunt and he seemed equally uneasy.

Looking at him, I suddenly came to an unhappy conclusion.

"Did you ever notice we carry around these weird futuristic assault rifles with grenade launchers? Who even makes these things?"

"Never really noticed," he admitted, "I guess I just figured they were made by some other division of the company."

"I mean, we're guards in a science building and our guns have frigging grenade launchers on them. That doesn't strike you as odd?"

"Now that you mention it, I guess it is strange."

"And you you never noticed that we wear all black uniforms and jackboots?"

"I guess not," he said and looked down at his arms and legs. "It's just a low-maintenance color, I guess."

"Maybe," I gave him that much despite my experiences removing my dog's hair from my uniform, "but have you noticed the patches on our arms?"

Blunt held out his left arm so that he could see the patch.

Blunt again held up an arm to inspect the patch.

"Huh," he grunted with realization.

"Yeah," I pointed to his patch, "it's a crimson skull on top of a biohazard symbol. I remember noticing it when I first joined but I just thought it looked like a cool tattoo or something. Now it all makes sense."

"Holy crap," he looked at me with wide eyes. "That means…"

As if to emphasize our unfortunate position, the double blast door dented outward with a loud clang of metal. The shape suspiciously resembled the head of a 50 foot tall raptor. The thing beyond the door shrieked as loud as any jet engine.

"Wait a minute," Blunt was pale and stricken, "if that thing is a monster made by evil scientists, that makes us...henchmen."

"We're not even that high on the food chain. Those are the guys who proactively do things. We're just evil guards. So when that thing busts down the door in its kill frenzy to demonstrate the folly of its own creation, we're going to shoot our guns a couple times and then it's going to bite us in half."

"Oh, man," Blunt shook his head, "I've got a wife and kids, man. I've got fish. I've got eight payments on my frigging Camry. I can't get bitten in half."

The raptor began an incessant hammering against the blast door. The metal began to shriek and deform under its inhuman assault.

We both turned to face the door, readying our assault rifles.

"Do they give you dental?" I asked.

"What?!" Blunt was on the verge of hyperventilating.

"Dental coverage, do they give it to you?"

"Yeah," he replied, "they give me dental coverage, but it's got a 50 dollar copay so it's not really all that hot."

Blunt looked at me, his eyes wide with fear. The hammering increased. The hinges of the door began to buckle.

"Right," I shouldered my gun and retreated across the hall. "Let's get the hell out of here."

I pulled the fire alarm and ran without looking back. I had just rounded the corner in the direction of the dolphin baby radiation testing chamber when I heard the monstrous howl of the raptor as it burst through the door. I looked back and Blunt wasn't there. I heard a chatter of gunfire cut short by an agonized scream.

"You poor bastard," I muttered. "You poor, evil, bastard."

Then I ran for my life.