ANNOUNCER: They're mad as hell.

WORLD OF WARCRAFT PLAYER: Druids are useless now! All Blizzard does is lie and screw their customers. I'm so going to cancel my subscription for this B.S.

ANNOUNCER: And they're just going to keep on taking it.

ANONYMOUS BLIZZARD EMPLOYEE: They're losers. They are going to keep playing because they have nothing else going on in life.

WORLD OF WARCRAFT PLAYER, while kicking a small dog in the ribs: Ugh!

ANNOUNCER: ...and asks the question, why do they rage?

NARRATOR: In a suburban community of Southern California, Jonathan Malfoy is waking up bright and early at 1:30 in the afternoon to start his day. He is a 23 year old living with his parents and perusing a computer repair vocational certificate at the local community college, where he is on academic probation for absenteeism.

JONATHAN MALFOY, sitting at the computer and cracking his knuckles: It's go time. Mom! Is there any lunch yet?!

NARRATOR: Today isn't test day however, the long-anticipated 2.0.10 patch, a kind of update or "band-aid" for a video game, is being uploaded to his computer. But Jonathan's destination isn't the virtual reality world of Azeroth to check out the changes, but the World of War Craft community forums. 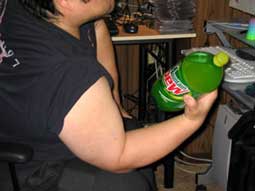 JONATHAN MALFOY, typing and talking aloud: God, everyone who works at Blizzard are a bunch of failures. More like World of War Crap.

NARRATOR: World of War Craft is a highly popular computer game with over 40 billion users logged on during peak hours. It's similar to the Dungeons and Dragons games of yesterday, except War Craft can be played simultaneously with millions of other players around the world. They are called "massively multiplayer online role playing games", and they are sweeping America's Internet-minded population by storm.

MOTHER: Johnnie-boy, I made a sandwich for you!