Strip clubs are the pinnacle of male entertainment. For those of you not familiar with them, these are not the same type of clubs we use to strip baby seals of their lives and their precious, precious fur. Rather, they are totally different, sexier clubs that we use to strip women of their dignity. Their main purpose isn't to bludgeon, but to entertain men, and to fool them into giving away large sums of money. Men gladly pay hundreds, if not thousands of monies to see girls shake their respective groove thangs on the stage. But what's really the allure of the strip club? Is it the naked girls, or is it something deeper than that? Well, to blatantly ruin the ending of this article, it's quite obviously the naked girls, dumbasses. But for lack of a better idea, it's time we dove headfirst into what makes strip clubs so very popular. 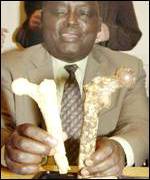 In 1992, this small time pimp attempted to bring Ughi (also pictured here) back to the strip club scene. It was a miserable failure.

Even back in caveman times, strip clubs existed. Men in the tribes would gather around a fire to watch loose cavewomen remove their filthy animal hides from their smelly, unshaven bodies. This was considered very sensuous at the time, as filth and animal feces were considered adornments, like sexy lingerie is to modern women. Thus, many overtly sexual females became known as "Dirty girls", a phrase we still use today. The first recorded stripper in history was a woman named Ughy, who would perform a primitive poll dance by swinging from a dead woolly mammoth's still erect penis. She changed her name to "Ughi", and was an instant success. Like today, men began to throw money at her in huge amounts. However, since currency back then was heavy rocks and spearheads, Ughi was dead within minutes of the start of her success. This caused the concept of the strip club to disappear for eons, until some genius in the 20th century figured out that men like breastacles.

Modern day strip clubs revolve around many similar concepts as their stone aged ancestors. Still, there are some subtle, yet key differences. For one, erect mammal penii are replaced by equally unsanitary metal poles. The invention of paper money now allows for much safer interaction with the strippers, and a simple 20 dollar bill can buy you the epitome of the strip club: the lap dance. Involving a careful balance of bumping, grinding, and restraining the disgust they have for you, a lap dance is the perfect ego booster for anyone who can't get laid. Finally, the women are no longer filthy and smelly, but are often neither. At most, you'll find the occasional smelly girl, but she'll have no filth - that's a guarantee you can take to the bank. The sperm bank that is, as there is no way you'll be spraying manload on any of these girls. Unless you're a celebrity or a millionaire, the ladies will almost certainly not touch your Vas Deferens or your sweet, sweet perineum. Still, the stripper will do everything in her hypnotic, jiggly power to keep you thinking there's a chance. In fact, it's their job to make you think there will be sex so you shell out more and more cash. You like what you see, but then you pay only to find out the end is just a wall of hope-shattering disappointment. Much like the movie "The 13th Floor". 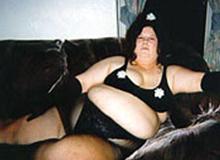 This girl clearly opted not to swing on a star, or carry moonbeams home in a jar.

Strippers usually have regular lives outside the club, and stripping is often their 2nd job. Most of the time they are one of five types of girls:

Girls in school to become teachers

As you can see, education is very important to the stripper. In fact, these girls are among the most intelligent you'll ever meet. They can add up the amount of dollars shoved in their G-strings at a rate that would blind that toothpick counting bastard rain man, and can do it while gyrating their bodies with the athletic coordination of an Olympic gymnast. They also have formed one of the best workers unions in existence, making stripping an extremely well paying profession. In addition, their union gets them many benefits like ugly insurance, which will pay for a stripper past her prime to retire comfortably.

When visiting a strip club, there are certain rules of etiquette you should follow. First of all, unlike the outside world, in a strip club "No" does not mean "Yes". Always ask before doing anything, and then stick with what they say, lest you be introduced to a large hulking Italian mobster with a body part in his name, such as Sammy "Legs" Valenzolo or John "Manass" Carollo. Second, keep in mind at all times that these are ladies. They have feelings and should be treated with dignity. Do not call them whores or sluts when they grind their sexual organs against yours during a lap dance, because they are very sensitive. The girls, not the organs. Those have been desensitized by years of whoring.