Winter Sucks, But Try To Enjoy It.

This is quickly becoming my personally favorite. I used to spend the winter afternoons in my front yard making snow angels, now I curl up in my bed anxiously awaiting the sweet angel of death. Actually, depression is a lot like celebrating the Superbowl at my house in that it happens in terrible weather and requires three party subs. 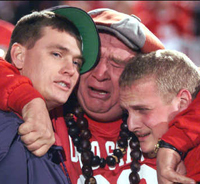 I already mentioned football, but there's also basketball and hockey, the
two most racially segregated sports America has to offer. Unfortunately, Columbus, Ohio doesn't provide many celebratory professional sports, but we do have a hilariously sports lopsided university! OSU gives the well-educated and groomed people of Ohio plenty of reasons for celebration. So OSU's second chance at the football national championship will fill the winter streets with either shirtless frat dudes chanting O-H-I-O and flipping cars because they don't quite know they're gay or elderly women wearing homemade sweaters and buckeye necklaces sobbing, their scarlet and gray face paint streaming down their face like some sort of clown funeral. Whoever wins, the majority Columbus's population loses.

I won't pick favorites. You've got three to choose from. Lets just hope you're right. Whichever you pick, I hope you enjoy eggnog. It's the only time of the year you can spike your drink at family gatherings and not be ashamed.

Aside from the major three, there's also New Years, which is the alcoholic uncle to the real holidays. All the other holidays are actual events, but this jackass shows up for like, two hours in the middle of the night wearing some dumb hat he's found on the ground, then sits his fat ass in front of the television to watch some Times Square bullshit before rambling incoherent resolutions into the night.

All right, who are we kidding? Winter only has one purpose.

As the leaves drop, many households fill their trees, picket fences, and gutters with lights. There has been a large politically correct drive to rename "Christmas Lights" to "Winter Lights." I completely disagree with this. The actual act of hanging lights around the house is one of the most confusing and infuriating task of the year and was originally done by Christians to gain a deeper understanding of the suffering of Christ. Though the original meaning left our culture years ago, people still go through the horrible process, until illegal immigrants start hanging up Christmas cheer for $5.25 an hour.

Christmas lights not only give the household something to do, but also provide the town with a night of fun. Many families pack into their cars, disregard any traffic laws, and slowly cruise around the neighborhood looking at people's lights. The twinkling, flashing beauty is an important and innocent moment in every child's life, while parents judge the neighbors based on their displays. The nature of Christmas lights has changed over the centuries, but the magic is always there. Maybe a brief timeline will help you understand.

Early Method of Chirstmas DecorationFlaming Arrows:Though originally a weapon, the flaming arrow was the first advancement in holiday cheer. As pagan Vikings were catching thatch roofs on fire, some Frankish surf looked at his house, dotted with flames, and thought, "well, that certainly looks festive."

Artists Rendition of Victorian Fun
Luminaries: These things were the most popular form of displaying Christmas cheer during the most boring era of displaying Christmas cheer. The Victorian Era has given us nothing but self loathing. Now luminaries are only used by your crazy spinster neighbor who starts stealing your empty milk jugs around Easter.
White Lights: Originally intended to mimic snow. These lights have become extremely popular, to the point that many gated communities outlaw any sort of colored lights, which conveniently aligns with their racial policy.
Icicles:These things are becoming the "norm." Wake up people! Sometimes more isn't better. These things are the Baroque era of Christmas lights, where quantity and flashiness always beats out common sense.
Big Bulbs: I've talked to the ghost of Christmas (lights) Future and big bulbs are making a comeback, and if these bad boys are accepted again, then prepare to buy a set of armor and prepare for another invasion.

Whatever their purpose in modern society, Christmas lights have changed a lot since their inception, and will continue to evolve to fit our culture and fashion. Alternatively winter has sucked since the last ice age, when the whole year sucked.

Alright, I'm on my way back home, but no where in my list does it explain how to enjoy freezing sleet. So if you want to find real, exciting enjoyment through the winter, all you have to do is vacation someplace that isn't suffocating in its own terrible weather. Sorry.