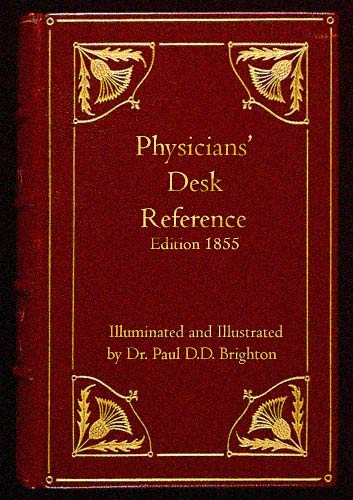 Whereinthe esteemed gentleman doctor, learned in both God and science, is advised on the means with which to combat the natural and unnatural. To comport one's self with gentleness and compassion towards his patients. To understand, in full or in part, the exacting details of the illnesses that befall the gentlemen, ladies and Irish of this Victorian epoch.

A common Silvinski "Whirlydoo" mercury applicator, familiar to any doctor with a well-stocked bag.Mercury Deficiency
Symptoms: Disorientating level-headedness characterized by a lack of frivolity and an incurable apathy towards puzzles and conundrums. Worsening condition may lead to utter disenchantment with shuttlecock and increasing disinterest in the sublime.
Cause: A compounded dietary inadequacy of nature's tonic, mercury as should be found in the King's water, finest ales and all manner of tinned jellies and jams.
Treatment: Administer four cups whole mercury rectally and prescribe 100 mercury capsules to be taken with tea three times daily. If symptoms persist, continue mercury capsules and bleed patient thoroughly.

Barmy Baby
Symptoms: Though it can be hard to fully judge, Barmy Baby often presents as nothing more than a lingering dullness to the baby's expression. In severe cases the Barmy Baby will appear to have inherited bestial shortcomings to its visage. These might include a swollen head, odd coloration, distantly-spaced eyes and even severe deformation such as missing or additional limbs. The Barmy Baby is a varying degree of grotesque, at times of such horrid countenance as to send the mother shrieking from the bed and at other times of a subtle horror only detected through mastery of the physical science of phrenology.
Cause: Sinfulness of mother and idolatry are the most common causes, but the physician must be gentle about placing blame upon the poor woman; she may have been taken in her sleep by a black tomcat. Only in the most horrific of cases should hanging be considered.
Treatment: The greater grotesques created by this terrible affliction should have their brains immediately dashed against a wall by an administering physician or midwife. If such a creature is caught early, the mother can be given a swaddled corncob doll in place of her infant and not know for many weeks the difference. By then she will be so entirely fed up with her child's sloth that she will care little when she discovers the subterfuge. Less severe cases should not be so hastily destroyed. Though they represent pure evil and may, in later years, be fearfully strong and prone to violent contrariness, the Barmy Baby can enjoy something resembling a human life of servitude and manual labor. In these cases advise the mother to tame them early and well with the lash and to consider the advantages of bondage with one of the Australian or American companies.

Even a well-bled patient may succumb to this dire malady.

Gypsy Pox
Symptoms: Horrid red raised spots appear intermittently and itch to the point of near madness in the sufferer. In woefully severe cases this can lead to dangerous fever, the drops, night quakes and even death. In some cases insects can become attracted to the raised spots and may even be seen to drink from the pox.
Cause: Proximity to the unclean folk of Roma, who spread their foul spore invisibly in the air like the dander of a house cat. Most often contracted in the gypsy coves along rivers, streams, ponds and of particularly the bogs from whence the gypsy and the Irish both emerged.
Treatment: An unguent of cinnamon and tallow applied topically along with an aggressive treatment of bleeding can head off further worsening of the condition in the patient. Brown paper and a poultice of clover should be applied to pox as they appear. If the patient falls to bed rest, then little else can be done. Cluck softly and shake your head in the company of family to the stricken. Perhaps suggest their beloved be measured for a fine casket before they grow rigid with morbidity.

Black Shank
Symptoms: Tenderness and blackening of the shins. Can cause such fearsome agonies to wrack the lower legs as would lay low a Hindoo elephant. Nearly every case develops in urchins or the Irish.
Cause: Once believed a pox set upon the urchins by the Catholic Pope during a fit of pique, the divine science of medicine has since demonstrated Black Shank to result from repeated injury to the shin-bone. Nearly every case appears in members of the lesser folk tasked with tending coal carts in mines. Coke carts of Stevenson manufacture are known to incorporate a locking mechanism to allow entraining of the carts. This mechanism is located at precisely shin height to a waif or stunted paddy. These carts, laden with black rock, would slam the shins again and again, producing fissures that become cursed with the black rot.
Treatment: A tablespoon of powdered sulfur, taken from the bottle or baked into something more palatable, will ease the pains accompanying the discoloration. To the affected skin apply brown paper, although warn the patient that, thus treated, there may be little change in the color. As this disease most commonly will be afflicting the lesser men of the Empire it is suggested you prescribe a sucking of eggs or a time in the service to the King, wherein they might find the lack of coal trolleys and the sulfurous black powder eases their condition.

A common household egg vice will do well to tame the inner devil in severe cases.

Devilish Somnambulism
Symptoms: A wholly male affliction most commonly evidenced by a dreadful effluent within the night shirt upon waking at the cock's crow. Such is the quantity of this mysterious discharge that it would seem the man was taken by a harlot against his will in the grip of sleep, though he has no recollection of such an event. Most likely he has risen from bed, yet remained in torpor, and set out to find the company of a willing woman. This disease is often to be found in boys on the cusp of manhood and in such cases is accompanied by an unbidden engorgement of the nethers that can lead to terrible embarrassment outside the water closet.
Cause: The turmoil of humours found within a boy as he advances to the noble endeavor of manhood is most commonly the cause. It can also be that a man, weak of will, is taken by this palsy carried on an ill wind.
Treatment: Salt peter tablets taken daily should be sufficient to tame the devil working its terrors at night. In the case of excessive engorgement, a local bleeding - preferably using leeches - is recommended. If engorgement persists, or if the salt peter does not suppress the nocturnal desires of the man sufficiently, then egging is the only recourse. Acquire a pair of brass egg vices and apply them to the man's bagged eggs as tightly as the patient can stand without fainting. This illness rarely takes hold in a woman, but in such cases it is best to shut her up in a cellar, brick over the doors and advise her kin to try to forget she existed.

When the illness has run its course, the lady sufferer may be released.

Four Day Wound, The
Symptoms: A general womans' malaise, striking quite frequently among ladies of sufficient age to give child to a man. The most identifiable symptom of the illness is a sanguine flow from betwixt the woman's darkest cove that may be sufficient to completely saturate her bodkin. Secondary symptoms include aches, pains, vapors, ill-digestion and an unnatural agitation on the topic of all things.
Cause: The four day wound might come often to some ladies and not so often to others. As always, when it appears it is a sign that a woman has defied the divine plan of Our Lord by not putting herself to use in the act of procreation. Treatment: Hire a contingent of four strong-backed diggers to construct a well and transport the afflicted woman there. Isolated, she will wear herself ragged pounding on the walls of the chamber and bring no undue shame to your house. If she is particularly noisome or you simply must take in guests during the period of her illness, place a brass Bastille cage about her head and fill her mouth with cork. Once the period of four days has elapsed, she may be excavated from her warren and set about her former tasks.
Additional Treatment: If unnatural bleeding persists, you may attempt to winnow the lady's sheath with a large candle, a crank fan and a soup ladle or large spoon. The afflicted lady may complain of some discomfort during this process as they are wont to experience any injury, both emotional or to the body, to a much greater degree than a gentleman. If the lady's distress becomes too loud you may administer laudanum as needed to maintain a calm and ordered operating theater. In particularly epic cases of this affliction, cessation may require a thorough wrapping of brown paper to be applied over the lady's private entrance with a cork mash plaster filling the crevasse itself.

Take care to remember the old physician's code Nascentes morimur - from the moment we are born, we die. It is your responsibility to society, as the gentleman physician, to stave off the lifelong process of dying so that man might toil for another decade, year, or hour. The commoner must know: the King will have his forty years or you have been of no use to him at all.