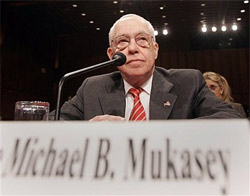 Michael Mukasey was confirmed by the Senate on Thursday as the new United States attorney general. Six Democrats crossed party lines to vote in favor of Mukasey's confirmation, bringing the total to 53 to 44. The confirmation was controversial in large part because Mukasey refused to denounce the procedure known as waterboarding as torture. The tone of Mukasey's answers on the subject is probably best represented by a brief exchange with Rhode Island Democrat and fancily-named dandy Sheldon Whitehouse.

MICHAEL MUKASEY: I don't know what's involved in the technique. If waterboarding is torture, torture is not constitutional.

Mukasey's confusion over the issue of waterboarding is completely understandable. It's not as if TV news has been discussing waterboarding for more than three years. It's not like he has access to some sort of amazing searchable network of information that could provide him with answers about "what is involved in the technique." People in his position don't have time for such things as time-consuming research. They have the real business of administering justice to worry about.

Since Mukasey has been confirmed and will be taking over as attorney general I thought I might devote an article to explaining a few things to him. That way he can have a concise reference of what is torture and what isn't torture so he doesn't get bogged down in all of this moral relativism that seems to be confusing people in Washington.

The people asking you questions are wearing ski masks.

Unless you are being interrogated outdoors on a ski slope, ski masks are generally not an important part of lawful interrogation methods. A rule of thumb on this is if your interrogators are wearing any of the headgear worn by people you are supposed to shoot in Hogan's Alley then you are about to get the shit tortured out of you. This includes black burglar masks, skullcaps and sunglasses, and oversized fedoras, but does not include police hats or old lady hats.

Somebody keeps trying to stop you from breathing.

On a scale of importance from one to ten I think it's fair to say that breathing rates about a 9.7 or 9.8. Maybe even a little higher. It's up there with "having a beating heart" and "not being on fire." When someone tries to get you to stop breathing, even temporarily, that's a pretty good sign you're being tortured. The other possibility is that they won't stop so you can breathe and they don't want you to answer any questions at all, in which case congratulations, you are just being murdered. 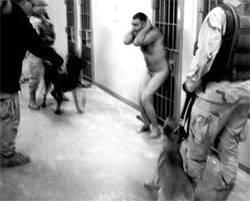 After you answer a question dogs bite you.

Dogs usually don't play an important role in interrogation procedures, possibly because they know only a few words of English and cannot communicate their questions very well. A dog won't have much of an opinion one way or the other about the quality or the veracity of the answers you are giving during an interrogation process. If you are being menaced or bitten by snarling dogs don't think of it as the dogs judging you as a person, think of it as your interrogators torturing you.

You are being interrogated in a country mentioned by Borat.

Some guys put a bag over your head while you were buying shoes at an outdoor market in Baghdad. A few hours later they took it off and you're pretty sure there is a skeleton shackled to the dungeon wall next to you. Welcome to a secret prison in some former communist country. Kreblakistan agreed to "enthusiastically interrogate" you and the Americans promised to buy 600,000 tons of their potassium manganate. You are about to get one heck of a torturin'! As an added bonus you have just been promoted in rank from "some guy with an Al Qaeda website in his IE cache" to "Al Qaeda's number two man in Iraq." Better start thinking of a "credible threat" you can blurt out before your foot is fed into a hand-cranked meat grinder. 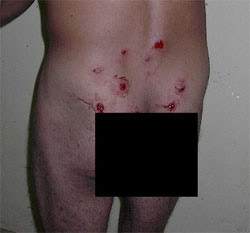 Huhuhuhuh some asshole at Meathead U got drunk and shot in the butt by paintballs and now we can subject suspected terrorists to the same collegiate hijinks!You are the subject of a "fraternity prank" and you are not in a fraternity.

The phrase "fraternity prank" is often used by pundits to trivialize interrogation methods, but I have viewed enough videos of people lighting themselves on fire trying to hit a burning watermelon with a golf club to know that fraternity pranks are torture. Just because Steve-O stapled his testicles to a board or wrestled an alligator in a septic tank doesn't mean you aren't getting tortured when the same happens to you. One of Saddam's most notorious torture methods was blindfolding people and making them jump off the second story of a building. I watched a video of a skateboarder trying to ride off a roof onto a rail 20 feet below and he ended up nailing himself in the balls, which is worse than just landing in the dirt. Masochists and morons torture themselves all the time.

You are blindfolded, bound, and naked on the bottom of a pile of men you did not meet on Craigslist.

Being blindfolded isn't torture. Being naked isn't torture unless you have really bad self esteem issues. Being bound isn't torture, although there was this Japanese video I saw where they figured out how to tie up a clitoris that might qualify. Being all of those things and struggling to breathe underneath the crushing weight and unwashed man-musk of a meat pyramid is torture. They can't even hear your answers to questions because some guy's crack is in your face. On the plus side, you are totally going to be the centerpiece photo of the Flickr page.

You have been standing up for more than 24 consecutive hours and you are not in line for a Harry Potter movie.

One of the favorite "enhanced interrogation techniques" of the CIA has been to shackle a prisoner to the floor and force them to stand in one place for more than 40 hours at a time. Prisoners in this position are not allowed to fall asleep or sit down. I once waited in line for Millennium Force at Cedar Point for more than an hour and I would have said just about anything by the end of that to make it stop. I even had a totally sweet rollercoaster ride to help me get through it. I would imagine after about ten hours you would say anything just to sit down, rollercoaster or not. You don't give the most reliable sort of information when you are so tired you're seeing unicorns and will admit to grudge-fucking the Olsen Twins on the International Space Station.

It is my sincerest hope that Michael Mukasey will print these out and hot glue the pages to the bare back of the Arabian catamite he keeps chained to his desk. Maybe that way when he reaches for his salted scourge he can be reminded that what we're doing isn't okay just because it isn't as bad as what someone else is doing. With a little luck and some honest discourse we might just end up with a Department of Justice that doesn't match David Addington's vision of a windowless castle carved out of a black meteorite and echoing with the screams of the dying.