Are You There GameSpy? It's Me, Zack.

It must be Mardi Gras because GameSpy is hiding baby-shaped turds in the cakes of every single game I buy!When I'm not getting venom-soaked e-mails from people enraged at me for fake-spoiling the new Harry Potter outing (it was actually Dumbledore that dies) I like to kick back and relax with an ice cold beer and my current video game of choice. As a mediocre internet celebrity I doubt any of you care what brand of video game or beer I choose to indulge myself with. After becoming slightly intoxicated I stumbled over to my computer to browse the Internet and accidentally ended up at one of my least favorite gaming-related web sites; GameSpy. I found myself reading an article that covered the 25 dumbest moments in gaming and immediately wondered if they had ripped off my work of towering genius entitled "The Five Biggest Jerks in Gaming". Fortunately it seemed that their trip was to wells far more familiar, although amazingly not a single reference to that porno General Custer game for the Atari was in sight. I'm sure long talks were had over the editor's cocaine mirror in the GameSpy bathroom at "Custer's Revenge" being omitted from their list.

Other than the lack of "Custer's Revenge" on this list what was remarkable to me was the fact that GameSpy had attacked everything from Sega to Atari yet somehow had made the incredible oversight of leaving themselves off the list entirely. I'm not afraid to say that GameSpy is one of the most horrifyingly bad companies in the industry and that their primary product - GameSpy Arcade - is quite probably the second most hated piece of software next to RealPlayer. That means that I would rather download and install Bonzai Buddy than use the GameSpy Arcade player. With superior alternatives out there like All Seeing Eye, I think a large majority of gamers sincerely hope that the company will go out of business entirely. I can't stress how much I absolutely hate their adware bloated piece of shit and how it runs, but even more than I hate the software itself I hate the fact that it has infested a number of my favorite videogames.

It's fair to say that about half of the online PC games out there use GameSpy in one form another to provide multiplayer action over the Internet. This would be great if GameSpy wasn't so horrible, and would be tolerable if GameSpy Arcade wasn't often packaged independent of the multiplayer interface, forcing you to install separate software to play a game over the Internet. I have completely ignored the multiplayer components of any game that force me to install GameSpy Arcade because of how much I hate their fucking software, so basically when I buy a game that uses their shitty program they are personally robbing me of enjoyment of the game. As a means of celebrating how much I absolutely hate GameSpy I would like to take a moment to offer to you the "Three Dumbest Moments in GameSpy History." 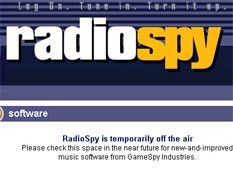 The public has been clammoring for a multi-million dollar piece of software that lets them find the web radio stream of some kid playing Vanilla Ice that he talks over in a fake girl's voice.During the height of the Dot Com economy every startup was trying to capitalize on any idea their development departments and executives could cook up. Many companies had ideas that were less than sound, yet they forged ahead with them anyway. It would be difficult to find an idea more moronic than GameSpy's sister venture RadioSpy.com, which proposed to bring to the table the sort of quality we've all come to expect from the GSA matching service, only for questionably legal web radio streams! This might sound like a decent idea, but before you think that let me drop the bomb that GameSpy isn't a couple guys in a basement, it's a full fledged corporation. When it launched RadioSpy it had an infusion of capital in the millions of dollar range courtesy of Mike Ovitz. After months in development the site went live, and then in the span of about an hour unraveled as it became apparent that web radio was already a dying breed and not many people wanted much to do with a company making software to find 28kbps streams of Tom Clancy books on tape. Like every good and retarded Dot Com company, RadioSpy had a massively bloated and probably well paid staff that got their pink slips while they were still pissing champagne from the launch party. It was a monumental abortion of a business venture and somehow, unfortunately, it did not also sink GameSpy itself.

This whimsical cartoon clipart is the only thing that keeps me warm at night.GameSpy's FilePlanet is now one of the few remaining major file clearinghouses on the web, enticing people to download patches and demos from their servers with promises of short waits and high speeds. Until such a time as Bit Torrent completely neuters this segment of the online business - no offense FileShack - GameSpy will probably be around.

For those of you who have never had the intense, almost erotic, pleasure of using FilePlanet before, please let me explain what a joy it is! Imagine waiting in line for hours while people repeatedly walk up, slap you in the face, and then scream at you about the latest add-on pack for “Battlefield 1942”. When you finally get to the front of the line you realize that there is just a dead drop down onto some spikes about 500 feet below you, but you can’t turn back because of the press of all of the people waiting in line behind you. You plummet to the bottom screaming and are impaled on the spikes. While you are bleeding out and gasping for breath you see Eletronic Arts CEO Larry Probst eating a sandwich. You cry out to him for help and manage to get his attention. He ambles over to you, stares down at you, and then begins to crush lemon halves into your wounds while laughing. Welcome to FilePlanet, enjoy your stay on this world of torment.

Way back when this sort of distribution method wasn't really recognized for what it was (completely lame) GameSpy was having some individual problems of their own. In 2002 GameSpy employees unintentionally infected two file servers with the Nimda virus on two different days. Apparently they were so accustomed to handling virus-like software like GameSpy Arcade they had forgotten about the danger of distributing actual viruses from their file servers. And so it was that over 3,000 people downloaded Nimda infected files from the GameSpy servers before the problems were caught. Luckily for GameSpy this all came on the tail end of the Nimda epidemic when every anti-virus program made since 1980 could quarantine or delete the virus. Unluckily for the rest of us this meant that GameSpy was not involved in a massive class-action lawsuit that cost them millions of dollars and put them out of business.

1. GameSpy Arcade Arrives on the Scene 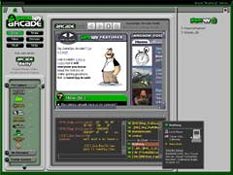 Hey, let's refresh that server list again and while that's taking ten minutes I can stare at this shock the monkey banner.I remember when I first heard about GameSpy Arcade. I think I was sitting around in my smoking jacket next to a crackling fireplace, a tobacco pipe in one hand, a brandy snifter half full of cognac in the other, and a sleeping mastiff hound at my feet. I arose suddenly from my seat with an exclamation similar to "by Jove!" and then I think I threw a Sega Saturn controller into the fireplace. It seemed like a completely sound idea, and for years GameSpy was a pretty decent product, or at least until Mark Surfas came along to turn it into a vortex of cash designed to absorb every ounce of revenue completely apathetic to the annoyance caused to their customers. According to Lowtax GameSpy Arcade became "just a bloated kangaroo pouch full of fat Jewish negro children who all want to steal your wallet." GameSpy Arcade is the sort of software, created by the sort of company, that I have had pinned for failure for quite some time. They fill a niche for game matching but they fill it so poorly and annoyingly that I thought surely they would have succumbed by now to apathy, disdain, or a grass-roots campaign to burn their home offices. Much to my horror instead of falling in on itself like a rotting tenement the executives at GameSpy have somehow led the company to a number of lucrative partnerships with developers.

For this I blame the laziness and mismanagement of the developers, particularly at GameSpy's biggest partner Electronic Arts. It's barely tolerable when a developer uses GameSpy's code to support game matching within the framework of its own multiplayer options, its another entirely when you have to install GameSpy Arcade, register an account, wade through banner ads, and deal with their shitty fucking matching service that refreshes too much and too slowly to play a game. So much so that as I mentioned previously I have shied away from the multiplayer gaming on any game that uses the GSA installer method of multiplayer at least until All-Seeing Eye has a solution for me. Unfortunately even ASE is charging money now, and while it still is not nearly as bad as GameSpy's piece of shit it definitely seems to be heading in that direction. This is fine, because if both companies are horrible it might finally force developers to begin standardizing and creating multiplayer matching services for their own games.

Those in glass houses and all that GameSpy. I'm allowed to throw all the stones I want at the dumb jerks in game making today because I don't make games, I just buy and play them. You cretins are actually a part of the industry that you're calling dumb, yet you ignored your own horrible offenses and for that I say BAD, BAD ON YOU SIRS. With this hotly-worded rebuke I leave you, but before I go I would like to say that I hope every employee at GameSpy is skewered on a spear and roasted over a firepit burning brightly with the hatred of a million gamers wronged. Especially Fragmaster, I can't stand that fucking Fragmaster.