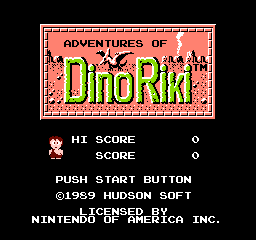 At a Glance: I am a busy woman, and -for one horrible moment- I thought I would be unable to bring you ROM Pit cheer this week. Fortunately, The Adventures of Dino Riki caught my eye. I'm sure you can guess which word in the title caused my attention to be seized like a 4oz bottle of Astroglide at airport security, but if not: That is me at your nephew's window at night, eying the contours of his plastic stegosaurus. I moan softly, imaginingwhat it would feel like to run my tongue along those lovingly detailed grooves on its armored plates (that probably offered little protection from predators but may have been used to maintain homeostasis.) Mmmmm!
Platform: Nintendo Entertainment System, 1989
Know a terrible ROM? Email me! 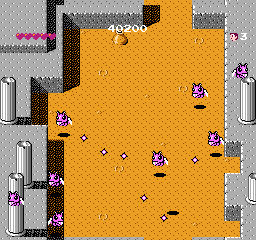 "Dino Riki" is a fun game which offers totally reasonable challenges!Story: The Adventures of Dino Riki is not exactly the sort of game that lends itself to video games' super dramatic plot elements, like finding out your father is the secret princess who kidnapped the evil childhood kingdom by throwing the Master Ball at Gruntilda's Lair. But naturally, a game set in the Stone Age is going to be... a shooter. Yeah guys, let's try to come up with the least viable premise for our game. What was the developers' thought process? "If we make a game that clearly shows we're suffering from some sort of brain tumor, we'll get a pony from the Make-a-Wish Foundation"? "My mother-in-law is deathly ill and at least if my family becomes barefoot and penniless on the street, bitch won't get her insulin"? "In ten years, a moron will agree to play this game for money, and I want to make her experience as stupefying as possible"?

Gameplay: You could say this game has a "slight" learning curve problem in the same way you could say Hitler had a "slight" ideology problem. Actually, it's more like a learning cliff; less than 30 seconds into the opening level, this becomes this.

As it happens, the key to getting ahead in Riki is various tiers of weapon power-ups. I didn't realize this 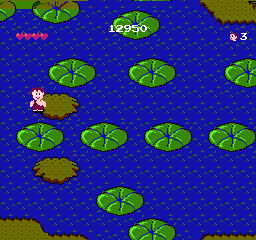 Don't like being swarmed with enemies? How about moving platforms that duck above and below water, with a man character that is perpetually shuffling forward compounded by gimmicky traction!immediately because I had no idea how a caveman was going to improve upon what appeared to be a Gruk-forsaken laser gun. At least the weapon progression is entirely logical: Laser gun > flowers > boomerangs > limestone flamethrower! Seeing as the cloud of enemies becomes thicker than a Neanderthal's pubic hair less than a minute into each level, you're completely screwed if you lose these power ups, which happens whenever you happen to be grazed by a piece of bat vomit.

Graphics: While some of the backgrounds make it completely impossible to tell what parts of your environment you're supposed to interact with, there's a certain demented innocence to the sprites that reminds me of South Park. OK I guess!!

On a side note, the fact that I associate South Park -a show which routinely features small children engaged in questionable practices such as sex, genocide, and Mormonism- with "innocence" is a pretty good indication that I have spent enough time on the internet.

Enemies: Legions of sprites that are apparently dying of cholera, constantly vibrating and upchucking at you. But something's amiss: we have creatures that are the result of an unholy ritual between Goombas and Satan, crap from Animal Crossing flying in blitz formation, and dragons that belch up dongs. But after playing through two levels of DINO Riki, SOMETHING IS MISSING. I'm not impressed by the inclusion of a single pterodon as a boss, by the way. That's a flying reptile; somebody didn't pay attention to Super 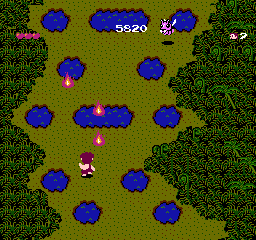 Fun: The idiotic difficulty level is overshadowed by yo it's The Adventures of Dino Riki: Starring NO DINOSAURS. Hey, while we're at it, let's make The Adventures of Sexy Riki, Starring the Senior Gentlemen's Bridge Club, or The Adventures of Politically Viable Riki, Starring Governor Shut the Fuck Up the Election is Over Never Again. Maybe there's a dinosaur in level nine million or something, but in the meantime, would it have killed them to have thrown me just one little orthomimus? (EDIT: A dear friend of mine claims I've spelled "orinthomimus" incorrectly. "Orthomimus," he informs me, wanking furiously, "would mean 'straight mimic.'" Hey, douchebag: I took two semesters of Ancient Greek, aight? I KNOW what it means, and I know Mr. Orthomimus personally. He's been in the closet for a long time.)

Defining Moment: As if the emotional pain caused by a lack of saurians, every time you die on this game (which is often), everything on-screen will pause in its busy schedule of blipping and puking to laugh heartily at your loincloth-clad ass. Thanks to The Adventures of Dino Riki, I can now end my life without any delusions of self-worth.