Muppet Adventure: Chaos at the Carnival 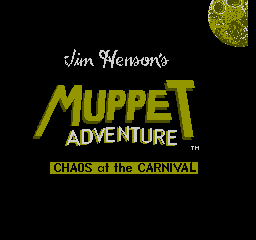 At a Glance: There is beauty in the manic genius of Muppets: a crazy bearded hobo decided to cram his hand up a frog's ass, and the rest is brilliant, hilarious history. I was a kid back in their heyday, and I really didn't appreciate the genuinely clever comedy they provided -a damn shame, if you ask me, which you should, cuz I know lots of things about shit. While it's sad to see their wane in popularity, I didn't think anything could ever ruin something as incredible as the Muppets for me. Fortunately, Muppet Adventure: Chaos at the Carnival has done not only that, but has won the prestige of being the first game ever whose graphics make me wish for ocular cancer.

Story: Miss Piggy has been 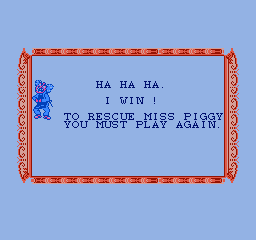 Step right up! Everyone's a loser!PIGNAPPED by "Dr Grump," a dude so evil that he owns and maintains a popular children's attraction! Right off the bat we have the Least Creative Video Game Plot of All Time: rescue the fucking princess. This isn't the first time I've pointed out that any sane person would get sick of repeatedly cleaning up after someone who clearly has the same level of personal responsibility as a pregnant cheerleader with Daddy's Credit Card in one hand and a rusty coat hanger in the other. But I guess it's not enough that games give failures with no discernible talent to show off their imaginary "prowess," so they have to let them show off their nonexistent masculinity, too! The only problem is: why the hell would Kermit need to save Miss Piggy? Sorry, Horrible Uncreative 1980s Video Game Designer, but I recall Piggy being pretty fucking hardcore. Oh well, gotta cash in on the pork fetishist market.

General Gameplay: So in order to "rescue" Xena, Porcine Princess, you have to get four keys from various carnival attractions to face Dr. Grump. Congratulation! It's another game that disguises the fact there is no game with shitty mini games! There are four in all, and they vary hugely in terms of tediousness and difficulty. I also hate that the little power-ups representing "POWER" (health) and "Ride" (1UP) icons look completely different in each game, but that's what I get for playing long enough to actually need them! Presumably once you get all four keys you fight the final boss, or just a tumor-inducing cutscene. I wouldn't know because I wasn't able to submit myself to 45 minutes of Fozzie T. Bear wandering around an ice cream nightmare, getting "rewarded" every five seconds with noises that sounded like an AOL-era modem being stripped of its carnal innocence. 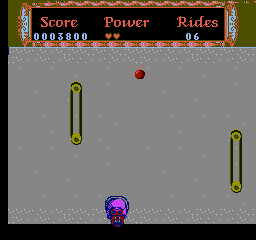 You're actually not looking at a piece of zombie feces magnified x1000. BELEVE IT... OR NOT!

Mini Games: There are four. They are not good.

River Ride: So lucky! You get to press left and right as the screen scrolls! But apparently whoever's responsible for this enjoyed crushing frogs between rocks as a child, because it happens a lot in both the literal and moral senses. This is the by far the "best" mini game, but I've played those with more sophistication on Neopets.com; at least there I could turn my cuddly pal into a Libertarian.

Car Course: This level is terrible because you shoot down an endless corridor with horrible controls and the color scheme of a beached whale's liver. Both Animal and your eyeballs are taking constant damage from this, but unlike Kermit's level -which is easy but you get power ups every five seconds- there's no health here! Mysteriously, there are different colored flags that both do the same thing (nothing), which makes me wonder if the programmers committed ritualistic mass suicide as their unholy creation neared completion.

Space Ride: An Asteroid rip-off, only with more drift! You fire with B to blow up space rocks, and eventually 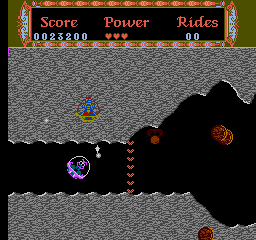 It's like a clusterfuck's slightly retarded younger brother. you are also attacked by what are either enemy spacecraft or the cast of Aaa! Real Monsters! Oh, you can also use the A Buttont to thrust, but the word "thrust" should never be used in conjunction with Muppets. You hear me, Internet? STOP IT.

Amazing Maze: Nothing ever happens in this game, yet it somehow manages the worst. I played through about 25 rounds of Walking-and-Touching-Stuff Gameplay, each level only sometimes differing vaguely from the one before it. It was then that I realized that, somewhere a forgotten space-time anomaly pocket, there's a poor motherfucker from 1990 playing on, his face still frozen in a manic grin as caked drool flakes across his Vanilla Ice t-shirt.

May God have mercy on his soul.

Fun: Muppet Adventure is cruelly deceptive. On the surface, its stupidity seems innocent enough, like your grandmother trying to send a text message to Jesus. But imagine that "Jesus" is in fact "Jesus, the Colombian drug lord," and that text contained her home address, your Social Security Number and a detailed account of your 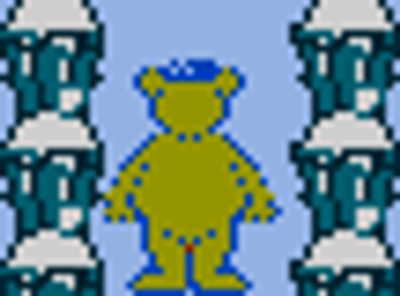 This game has made me ponder faith, morality, and why someone would lovingly place a single crimson pixel in Fozzie the Bear's anal region.parents' sexual history. See, the game includes just enough hateful bullshit to make you think those goddamn talking rags are mocking you. For example, Gonzo's ability to destroy health containers by accidentally shooting them, or the fact that the shortest, easiest level crams health in your face incessantly and the most obnoxious one has eliminated restorative items entirely. The games aren't the hardest things I've ever played, but they're just hard enough when combined with how ugly and irritating they are to make the finished product unbearable.

Defining Moment: Once again, it's hard to pick out the precise moment in which my heart drowned among a sea of disappointments. If I had to pick one that symbolizes that symbolizes the futility of persistence, think it's the inclusion of Camilla, Gonzo's pet chicken and arguable love interest, in the space level. I really did need continues, and I'm assuming she functioned a 1UP of sorts, but Gonzo blasted away both his true love and his only hope for survival with a stray star-bullet. Muppet Adventure may be a failure of a game, but it's a hell of a good poet.