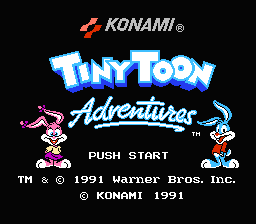 At a Glance: Why, I do declare! It's time to visit my childhood! ...once again, I would have stopped this snazzy introduction here, but the program we at SomethingAwful use to bring you textual comedy is still on the fritz! I am unsure what to do about this short of threatening Richard "Probably Doesn't Write the Code" Kyanka at gunpoint, which might be a bad idea because he writes my paychecks! Also he is a very dapper gentleman so perhaps I should not do that!! Then again, if it weren't for him, I would probably be oblivious to 90% of the horrible toxic refuse of the Internet that now haunts my nightmares! Oh, speaking of which
Platform: Nintendo Entertainment System, 1991
Know a terrible ROM? Email me! 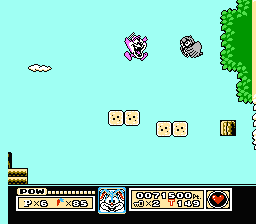 Does this look familiar?Guess what?! We once again get to rescue Miscellaneous Female Character X from drowning in a pit self-sufficiency by tossing her our cocks as a lifeline!! Although a website targeted almost exclusively at the 18-30 year old Pocket Pussy Demographic is a perfect place for deranged feminist ramblings, that's not the point I'm making here; I'm actually all for sexism, at least when it amounts to gullible dorks carrying all of my heavy shit for me. But like Miss Piggy, Babs Bunny never needed dick, literally or figuratively, in the context of the show. I have a feeling, however, that this plot development has less to do with anti-womyn sentiment and more to do with underpaid ape-men making a video game about the Saturday morning cartoon that spawned furries.

Graphics: They're extremely, maddeningly, and overwhelmingly okay I guess! The animation is really smooth and -hold on to your strategically placed holes- there are actually more than six colors in the palette. Granted, those colors are as washed out as my journalistic integrity, but seeing as it is finer art than this, this, or this, I really can't complain.

Say, aren't you glad you click on my hyperlinks? I open your eyes to a whole new world!

Gameplay: Ultimately, Tiny Toon Adventures's gameplay is the epitome of a mediocre NES platformer. I'm serious, here; when Plato himself was sobbing to his mother that he needed a new Nintendos to replace his old Atari MMCD, this is what he wanted for it. So to spice things up, they decided to let you swap your main character, 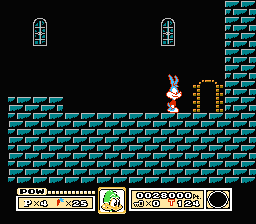 What about this?Buster, out with one of three "special" characters. Lucky for them, Buster doesn't do jack aside from jumping and making moderately disconcerting facial expressions, so they never have to do anything more specialler than responding to more than one button.

All of these novelty characters suck, but they suck slightly less than Buster, meaning his presence in this game is entirely unnecessary. Plucky can sort of fly, Furball can sort of climb, and Dizzy is the only character to actually get an attack that isn't jumping (unless you count the cat's strange ability to become a tornado-spewing Super Friends reject underwater.) Nevertheless, there is still a very prominent "Power" menu at the bottom of the screen. Hmm, I wonder why?

Ripoff factor: If you guessed "this game is a blatant ripoff of Super Mario Bros. 3," congratulations on having some rudimentary brain activity! Some similarities are easily explained with the whole Platonic ideal of a platformer thing, like collecting little icons and having a world map. Then you realize that the world map is completely non-interactive, a lot of the themes appear in the same orde and style as Mario 3, and that half of the soundbites are ripped from it verbatim. Now that I think of it, maybe honest-to-Bleeding Moon Goddess misogyny was involved in this game, as its makers felt the need to publicly humiliate Mario's girlfriend, too.

Fun: But as we all learned from 9th grade Algebra, copying is a great way slather something in quality without the effort. Not that Tiny Toon Adventures is good, but it's mostly playable, aside from those parts that are literally 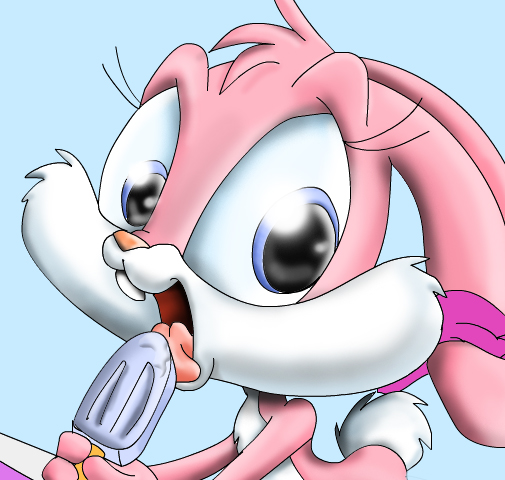 A good way to peform a self-psychological examination is to count the number of things wrong with this image. If you come up with less than seven, I have a special prize for you that is absolutely not laced with smallpox. If more than fifteen, I'm selling shotguns that come with complimentry pre-written apology letters to friends and family. If you are choking on your own vomit and thus unable to reply, congratulations on your first use of the Internet!! impossible unless you picked the right stunted lab animal at the beginning. I'd say the quality is high enough that the average stupid child would be significantly more likely to actually play it than jam it inside the orifices of younger siblings, unless of course those siblings got Mom and Dad's love instead of cheap 8-bit substitutes.

Defining moment: This is the first of many video games based on Tiny Toon Adventures, and they don't fucking let you forget it, either. There's actually a variety of midis made for the game, but at some point the programmers decided they'd spent enough time doing the musical equivalent of probing their own genitals; therefore, roughly 50% of the levels have a cerebellum-smashing rendition of the cartoon's opening theme song. I watched this show -which, sorry to bust your man-child boner, is not as awesome as you remember (click only if you have nine minutes to waste)- obsessively as a kid, so as I was playing the game I could hear the lyrics blasting in the recesses of my brains I thought had long ago been condemned for zoning projects. Everybody now!

We're all a little goony

We stalk the voice actress from this cartoony,

And take her show from your TV!

Except that wasn't how it went --oh wait, yes it was! Thanks for the memories, guys!