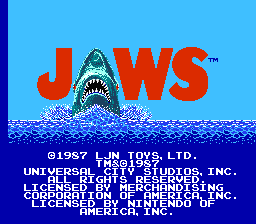 At a glance: Ah, Jaws. A throwback to a time when a shark could eat a chick in a swimsuit without anybody masturbating to it. Well, probably not, anyway. Hopefully not. If so, I don't want to know about it; I want to keep telling myself that in the days before the Internet, humanity was a responsible and relatively sane entity. Anyway, as much fun as it is hearing the distinctive Jaws riff sounding like it's being mouth-farted by a goat, the video game version isn't that bad. It's just boring, dumb, and -oh yes- you play as a murderous psychopath.
Platform: Nintendo Entertainment System, 1987
Know a terrible ROM? Email me! 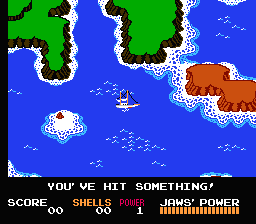 No you haven't, actually. Story: Jaws doesn't really give you a story, but it doesn't need one. It's pretty simple to infer that "you want to kill this shark because it is the size of the original XBOX and has a profound spiritual desire to make you a resident of its large intestine." I'll buy that, but I don't understand why you, aka Frothy McMurderfins, feel the need to carve every marine animal in the Atlantic into sushi. Is there a collection of decapitated fish heads below deck, lovingly arranged into a portrait of Frothy's mother? Probably. But who'm I to judge? There's a game to be played!

Gameplay: Sort of. See, Jaws is an ocean exploration game a lot like Endless Ocean, except instead of marveling at nature's beauty your job is to murder it up into manageable bloody chunks. You sail your boat around an almost featureless world map, which serves no purpose because Frothy's anti-psychotics have worn off and he'll announce every five seconds that "something has hit the boat." Naturally, nothing has actually fucking hit the boat, but it gives Frothy a convenient excuse to hop in the water and slaughter everything that twitches by spamming harpoons.

Jaws, meanwhile, is cruising around the world map, growing fatter from the fruits of your ichthian Holocaust. Once defeated, some enemies drop conch shells, which are used as currency in the few ports on the map. You never actually get to see the denizens of these ports, but I'm assuming they're just as unwashed and completely 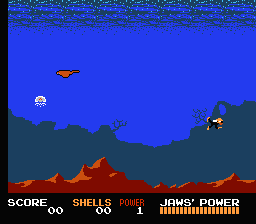 Terrors of the deep.fucking batshit as Frothy, as they reward you for your slaughter by giving you even larger, scarier harpoons with which to kill Jaws. But considering how Frothy has probably caused a few mass extinctions with his frenzied stabbings, I started rooting for the shark.

Graphics: As embittered and heartless as I am, it would wrong if I didn't admit that Jaws's graphics are pretty darn impressive for 1987. But that wouldn't be funny, so instead I'll say: RAWRRRR I HATE THESE GRAPHICS THEY ARE SO BAD THEY HAD UNNATURAL RELATIONSHIPS WITH MY GRANDFATHER AND ALSO MY PET CHINCHILLA EXCEPT I DON'T ACTUALLY HAVE A PET CHINCHILLA BUT I REALLY REALLY WANT ONE BUT I CAN'T GET ONE BECAUSE THIS GODDAMN GAME SNUCK INTO MY MIDDLE SCHOOL AND CHANGED ALL OF MY GRADES TO BAD GRADES HONEST AND THAT'S WHY MY FAMILY HATES ME UNJUSTLY ARGH GODDAMN GAME IT'S ALL ITS FAULT ARRRWRR ARWARR NEGATIVE TWELVE MANBABIES OUT OF SIXTEEN I HATE YOU MOM AND DAD HURF DERP DURR.

There. Are you happy now?

Irritation factor: Even though you die in one hit, the ancient mariner strategy of "lying on the bottom of the sea and spamming the b button," means you won't croak too often. The only problem is that you can't kill Jaws until you power your weapons up all the way with conch shells, but you lose all of your power ups and a lot of your shells each time you die, meaning the game is more of an endless collectathon than a shark-killing adventure.

I think the worst part, though, is your character's homicidal tendencies being a cover-up for putting in Final 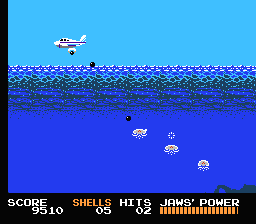 Overkill? What's that? Fantasy-esque "random battles." Honestly, when I finally saw Jaws himself, I was surprised he didn't have a single glowing wing, seventeen belts, and an endless parade of shitty spin-offs that nobody wants to play. Zing!

Fun: I have to give Jaws effort points: the controls are fine and they made some hamfisted attempts of spicing up the gameplay. Of course, there was a teeny tiny problem in that they failed utterly, but at least they created something that the typical mucus-secreting child could enjoy without suffering brain damage. It's definitely not a good game, but as its chief flaws are merely "boring" and "stupid," it's a masterpiece among ROM Pit titles.

Defining moment: Well if you consider "you play as a marine sadist" a flaw, there's that too. My favorite example of the depths of Frothy's depravity is the bonus round, involving a formation of jellyfish that perform a charming dance for you. Jellyfish are mean. I was stung by one as a small child. But only Psycho Bloodyfilletbeard would feel the need to drop bombs on them from an airplane. God I love nature! I think I'm going to turn off my Nintendo and go stomp on a few squirrels.