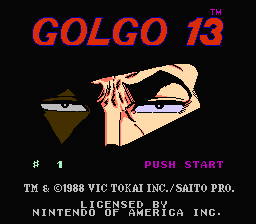 At a Glance: Being an internet celebrity, I receive a great deal of fan mail -sometimes as much as five pieces per week! While some consists of such lofty praise as "fuck you" and "YOUNG LADY I DO NOT APPROVE OF YOUR USE OF PROFANITY IT IS DISGUSTING AND MAY ATTRACT E-RAPISTS I DID NOT RAISE YOU LIKE THAT," most of it is requests for me to do particular games. I've gotten so many for Golgo 13 I should have expected something -perhaps an orangutan- to leap out of the screen and bludgeon me as soon as I pressed the "START" button, but I foolishly resolved to plow through with a smile on my face. Guess how long that lasted?

I love the dialogue of "serious" anime characters.Story: Golgo 13 is based on an embarrassing anime about a secret agent with an extremely humorous name. What makes it especially lovely that Golgo: The Game was marketed for kids is that it's about an adult anime, although calling any anime "adult" is like swearing up and down that this creature is 18. As anyone whose been forced to suffer through "grown-up" anime can tell you, it's always needlessly complex, and Golgo carries on this tradition like a proud samurai with widely-spaced eyes. I have no idea what the Christ is going on here; there are massive, unskippable blocks of dialogue and a bunch of sluts dipped in strange radioactive dyes that want to get into my pants, but otherwise I'm completely confused. I think I'm supposed to shoot people. Retsu go!

Gameplay: For the most part, you run around as the titular character, making people die in Da Big City. Rather than bothering to put health-restoring items into the game, they make Golgo into some sort of vampire, gaining health whenever you put a bullet in someone's face. Occasionally, you'll have "objectives," which usually consist of finding a crazy anime person hiding in what you assumed was part of the background, who then gives you a mission to walk left and/or right. 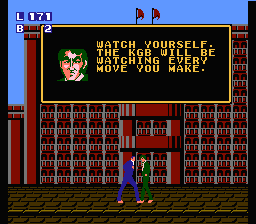 They're just mad I insinuated Ocelot was a homosexual when MGS3 was released. OH WAIT. ways to extinguish your zest for life!! The worst part, however, is the amazing "3D" maze mode, whose featureless corridors give you the exciting gameplay opportunity to literally wander for three hours before realizing you've been trotting in a 6x6 square and cramming a dinner fork down your throat!! Better yet, there are mazes in this game that you never actually have to visit, but they put them in just so you can waste hours of your time and they can practice twirling their mustaches and cackling evilly. Why the hate, Japan? It's like you've never gotten over that whole atomic bomb thing.


Graphics: I'm torn. Golgo's sexy close-up isn't terribly terrible, and some of the animation is impressive for 1988 -the helicopter sequences come to mind. Golgo tooted its horn for having "3D" mazes, but they hardly use graphics at all; everything is completely blank, making it about as exciting -if much more difficult to navigate- as copying a 2D maze from Highlights for Children and including a blinking dot for "YOU." The human sprites' graphics are also quite disappointing. Everyone is shaped like an anorexic Ethiopian basketball player, although it would seem that women are the only ones allowed to wear shoes. Take that, patriarchy!.

Enemies: First off, everything in this game shoots at you while crouching. This doesn't set off alarm bells until you realize you 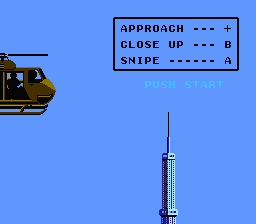 Note: These instructions do not actually work.can't do it. Thus, you have to jump over their bullets until they kindly decide to stand up. This is really difficult, because... Well, I'll admit that maybe I'm just bad at Golgo 13, but only because that statement carries as much shame as saying one is "bad" at drawing Blue's Clues pornography.

In addition to Enemies that Walk Into You and Enemies that Fire Orbs of Death, there are some that require strategy. Unfortunately, the game's controls are shit, so "strategy" becomes "you're fucked, hombre." For example, there are tall, thin towers that shoot lasers too quickly for you to dodge. They take a minute to turn left or right, so you have to hop on whichever side isn't facing you, plug 'em, then leap back over when the swivel about. Sadly, the game's jump is comically high but uselessly short, so even if you're standing right on top of these hulking one-block-wide death machines when you make the leap, you'll usually skim the other side with the backs of your ankles and DIE.

Fun: Yet another example of a game that attempts 239420 modes of gameplay, but doesn't bother making a single one

Having fun yet? of them good. Whether you're shooting people in a town, shooting people underwater, or trying to shoot yourself in a maze, Golgo 13 boils down to wandering around aimlessly. As if its obscene difficulty weren't painful enough, it forces you into a permanent WHAT THE FUCK AM I SUPPOSED TO DO?! mode -and not in a benign Legend of Zelda way, either, where at least you have the hope of obtaining some cute blue pajamas. It's also very long; I had only made it through four of eleven stages when I sat back, stared at my 400 screenshots, and decided my time would be better spent trying to seduce renowned homosexual Kevin "Fragmaster" Bowen.

Defining Moment: I spent about fifteen minutes fighting my way past three crazed bazooka guards. Apparently the game designers figured their audience must have ESP when they programmed them, because that was the only way one can reliably dodge their attacks and kill them. After taking them out with sheer luck/cheating I proceeded to.... a place that was completely empty! I had neglected to talk to some OTHER cretin, hiding out in a building a million miles away, first! I decided I would rather pierce my retinas than go through that again, and thus my Golgo 13 adventure came to a close. Ordinarily I am a benevolent creature, but I hate all of you who suggested I play this. I'm coming for your fucking shoes.