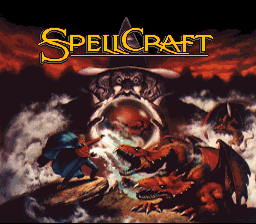 At a Glance: Greetings, Low One. I see you are utilizing the Internet, and this tells me your soul may be similar to my own: so perfect you're flawed, cut head and shoulders above everyone else. It was never your fault that your smarter then them - too smart for them to understand you, a cognitively and genetically superior being. But while both of our bodies are brittle and pock-marked, my will is strong. Rather than existing in your pathetic Doritos-coated world, I became mighty. My name is Robert, and I am a wizard. [Wilst thou see only through the clouded lens of your own reality?] Or dare you enter mine? 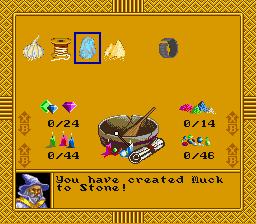 Do you like chemlab? You had better.Story: My transformation began at a gathering of people like you, which I attended against my better judgment. They suppose they are on my level due to their love of children's entertainment, but what do they know of fine literature? Have they wept for Frodo's lost innocence? Felt their soul rise in triumph with that of Drizzt Do'Urden? It was fate, then, that I spied a wizened old magician in the crowd, who bid [me imbibe a magic potion.] As I drifted through my trance, he summoned me by name, and I heeded his call.

It was [to be a call to manhood,] for my quest was soon aided by the succulent Selina. Never have I seen a creature of such beauty, except perhaps for Jennifer Simmons, who broke my heart with her petty female wiles in 8th grade. But although I still twine a strand of her golden hair about my most intimate of regions, Jennifer means nothing to me now, for Selina will not spurn a man such as I. It was Selina who told me where I must go to unlock both dreams and destiny. Having been unfairly dismissed from my post at a vile bastion of capitalism, I demanded of my mother tickets to Stonehenge, England. but the idiot wench accused me of taking both her bathrobe and her keepsake disco ball (although she did not yet suspect me of taking my brother's baseball bat to affix it to.) It was only by chance that her accusations were accurate, but these items are being used for something far greater now: my quest for immortality above the festering devil-children of your world. Without that useless cunt's support, I imbibed another potion and [entered a teleportative trance, which whisked me across the sea.] I knew I would unlock enough 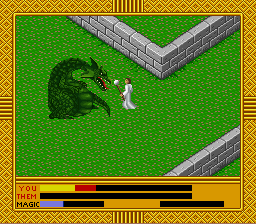 It reminds me of Ricardo Fellewitz, who once mocked me in Gym Class. We'll see how easily laughter comes to him when I've inverted the astral plane into his skull.power to either impress Selina or take her by force. Soon, skin tingling as if teased by a thousand strands of angel hair, I was on my way.

Gameplay: My journey made my weak heart grow strong in its joyful fluttering. For unlike my "peers" -I laugh to call them that!- at Wallaby Precinct High School, the wizard and the vessel were eager to converse with me, speaking at great length of politics and valentine evenings. I was [sent into the wilderness], stave in-hand, [to destroy beings even more wicked] than my harlot sister, who mocks me with her sex. The creatures approached from afar and threw themselves at me, but I dodged their dismal attacks with graceful leanings dexter and sinister. With my trusty stave I sent them to Hell to join lesser creatures.

Of course I know magick [-I am a wizard!] Cease in vomiting ignorant putrescence from that slovenly mouth of yours. Magick is not a craft to be taken lightly, and one of my caliber used it sparingly in battle. Each spell required charging, and in combat this gave my foes a slight advantage to in which to interrupt me. Of course, with the skills I learned in my [magickal training.] I could have triumphed easily, but I prefer more cunning methods. Mainly I attacked the Semite-like monstrosities from afar once I learned my fireball spell. In addition to combat, there were puzzles and switches which one such as I could easily comprehend -perhaps you with your small mind would assume they were [completely arbitrary], but that only shows what an idiot plebe you are. I could also use my magick to alter my environment, creating bridges and [siphoning mud from the earth.] True, the speed at which the magick worked meant it might be more swift to mop it up with a paper towel, but greatness is not a trait to be rushed.