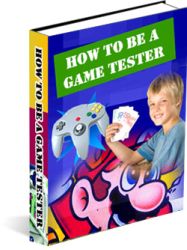 As the writer of a video game article so popular it actually shows up as the second result in a Google search for "Video Game Article", my opinions are something of a hot commodity. Not a day goes by without a beta test invite from a game designer breathlessly awaiting insights and sagely advice that will turn even the dullest of turds into glistening piles of pungent success.

Between my hectic schedule and the daily three hour "what have I done with my life" sobbing sessions, I don't have enough time to accept every invitation. Like a rock star beckoning the finest skank to join him backstage after an epic show, I choose my games carefully while sweat escapes every pore of my body.

I've been going through some of the feedback that helped to shape those lucky few games over the years, and some of this stuff is amazing. Reprinting it all here will hopefully be a fun read, and even more hopefully will land me a job as the president or owner of a game company.

I'd also take whatever job Gabe Newell has, as he always seems happy and my favorite class is also the spy.

Feedback: Woah, woah, woah... what's with all these powers? Flying around an open city and stopping bad guys with laser eyes and freezing breath is way too easy. Don't you guys know that players have to jump through proverbial hoops so they can feel challenged?

Feedback: I know you guys are pushing for a quick release, but eight months is not enough development time. Why not hold back for a while and give things a few more levels of polish?

I'm thinking there could be a bit more variety as far as enemies go. Instead of a bunch of human-sized bad guys that you shoot once or twice, I would love to see tons of really small enemies that move too quickly to shoot. The more I have to hold down the fire button, the more fun I'm having.

Feedback: I see a lot of potential, even at this early stage of development. You guys are really on to something big here. Just a few thoughts.

First, why did you include space ships? Sure, it's pretty cool that you actually walk up to your ship, board it, walk around the cargo bay with other players to do repairs or modifications and then pilot the craft without seeing a single cutscene or losing your point of view. And yeah, I was surprised that you can fly around just over a planet's surface to see the players below. It was an especially nice touch to give capitals and player cities automated turrets that shoot down any craft that open fire within certain areas.

That said, it's all a bit much. This is Star Wars. If people are chilling out in their space ships, manning turrets and physically choosing where to hide objects they're smuggling across the galaxy, they won't pay any attention to the real meat of the game: getting lost in the woods and hitting space muppets with metal poles and swords.

Also, can we place more emphasis on armor so you have to give up the Han Solo look and don an American Gladiators costume then pay for buff injections if you want to stand any chance in a fight?

Feedback: Really? The legendary unreleased Jerry Lewis Holocaust chucklefest The Day The Clown Cried in its entirety? I know it's just an easter egg, but it takes up way too much hard drive space.

Feedback: The tone is waaaaay too heavy. Maybe you could lighten things up with some random humor (monkeys, sexual innuendo etc.). Also, I don't like the pricing structure. Buy the game, play for free, then buy an expansion? No. Diablo did that, and you don't want to be anything like Diablo.

Warhammer 40,000: Dawn Of War II
A Space Marine will not rest until the same four mall parking lot-sized locations have been visited five hundred times, and every coliseum in the universe has been cleansed of loitering sub-bosses. 8/10

ShellShock 2: Blood Trails
When all else fails, add zombies so you can feel even worse about yourself in the silence of a lonely bed at night. 3/10

50 Cent: Blood On The Sand
Pure, distilled guilty pleasure distilled into ones and zeroes. 7/10

Halo Wars
An RTS that's so awesome, its television commercial does nothing to indicate it's not another Halo first person shooter. 6/10

Killzone 2
Like the the Helghast character designs, this has been done a thousand times before but the end result is still pretty good. 8/10