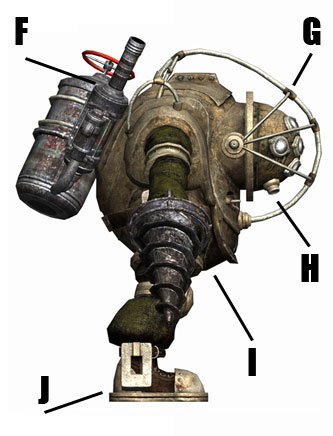 H. Downward facing portholes with inward-facing mirrored lenses for easy inspection of neckbeard's progress. Should be time to open the helmet to a round of applause any week now.

I. Crotch weights. Keep junk from shifting while simultaneously counterbalancing the hefty butter tank on his back. These two purposes are closer linked than you may initially think, as you'll find out late in the game.

J. Homemade Chuck Taylors with steel plating to protect Big Daddy from the laughter of kids with parents who can afford the real thing. Little do they know, this was exactly how Taylor envisioned his sneakers before succombing to Converse's concerns over production costs.

Madden NFL '08
Finally, an iteration that lives up to the next-gen title in more ways than "the disc can be read by next-gen consoles". 8/10

Bioshock
A frightening glimpse into what goes on in Sea Monkey containers every day, and the best game I've played this year. 10/10

Escape From Bug Island
Best escape plan: remove this disc from your Wii and throw it in an active volcano, then throw the Wii in there just in case it was tainted. 2/10

Boogie
I used to think that Nintendo's third-party developers were trying to make me hate the system, but now I know it to be true. 4/10

Attack On Pearl Harbor
Disappointing because as it turns out, you actually have to defend Pearl Harbor. 7/10

Combat Mission: Shock Force
When the original Combat Mission came out in 1998, this game would have looked pretty good. 6/10

Jeanne D'Arc
Has about as much to do with El Debarge as the true story of Jeanne D'Arc, but it's still great. 8/10

Mega Man Star Force: Leo
An excellent game that comes in three versions, practically begging Pokemon to respond by putting out Granite, Steel, Aluminum, and Barry editions of the next game in the series. 8/10

Heroes Of Mana
Combines the pathfinding AI of RTS games from 1994 with the neverending anime-face conversation windows of Japanese RPGs from... well 2007. 4/10