Console Warranty Carnage, This Cybermancy Is Divine, One Sentence Reviews

Your Console's Warranty Is Dead, You Just Don't Know It Yet

When you bring home a new console the last thing you want to do is read the manufacturer's warranty. Companies count on this. They don't want you to discover that all sorts of normal everyday activities render your warranty void, such as:

I grabbed E.Y.E. Divine Cybermancy during the neverending sale that is PC gaming. The price was something absurd, like a dollar or a smile and a promise to run along and have fun. 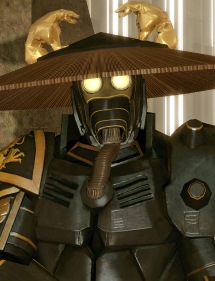 Friend? Foe? Get shot by em all, and let the Warhammer copyright lawyers sort it out.Well, I'm finally getting around to playing it. Am I having fun? Dunno. I'm certainly experiencing many sensations, presumably side effects of cybermancy.

My character isn't so much a character as a collection of stats, status effects, red numbers, and submenus. I have a gun and a sword. I need to run a half marathon to get anywhere.

At character creation I chose to be good at tech and shooting. I did this by selecting a nonsensical class title which meant nothing to me. This selection had to be made three times in total, then I was prompted to press a button to combine the DNA of all three choices. Naturally.

My brain can hack doors and turrets and other people, provided I navigate to the right menu and win the old school turn-based RPG combat mini game. My robot legs let me run fast and jump extra high but they break if I so much as think about making a three foot drop. I can summon copies of myself and invest in research and improve my skull. Sorry, my cyber armored skull, where my cyber brain lives.

Basically I'm role-playing as myself.

I don't know where I am or what's going on. There are rats and rat-sized insects and dog-sized mole things that I shouldn't kill. There are bad guys that I should kill, though they don't look very different from the good guys that I can accidentally kill. There are a hundred factions and I have heard all their names, but I couldn't tell you which I belong to. There are supposed to be neutral people I can talk to, so I just sort of slowly approach everyone and hope no one starts shooting at me. So far that has paid off in dozens of bullet holes and no friends.

The story? Well, everyone I've come across seems to be a Warhammer 40k Chaos Space Marine with a huge boner for samurais and cyberpunk. I can only imagine that we're locked in an eternal war with Games Workshop, who want to shut us down as soon as they can figure out why we're doing any of this.

I'm not going to finish this game. It's great that it this sort of impenetrable experience with more stats than explanations exists, though. It's the far less approachable asshole cousin of Crusader Kings 2 and Kerbal Space Program, other complex experiences that can only exist on the PC, even if they have very little else in common.

You can rule a war-torn nation while arranging to have your own children assassinated. You can put together a fully functioning space program from scratch. When you REALLY feel like a challenge, though, you can try to understand if your Mental Balance stat turning red is a bad thing, and if it's related to the ATM that hacked your cyber mind.

Risen 3: Titan Lords
Controls are still as stiff and fiddly as they've always been, which is fine because it's not like any third person game with cautious lock-on melee combat has shown that it's possible to make blocking, parrying, magic, and item use feel natural and engaging. 5/10

Sacred 3
Those who forget Space Siege are doomed to repeat it. 2/10