Hands On With The Nintendo 3DS

We were on hand for this week's Nintendo 3DS announcement, and while the $250 price tag and March 27th release date were big news, we were more interested in getting our hands on the device and digging up more information on the launch titles. 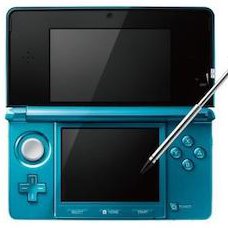 After holding it In person, I can confirm my initial impressions: The 3DS is essentially a Nintendo DS, but roughly three times as large, and made out of a sponge-like material. It features an analog stick (for non-digital games) and three new buttons below the bottom screen: Menu, Home, and Disable This Button.

One change struck us peculiar. Instead of closing in half in the traditional clamshell style, the 3DS simply breaks apart into two halves. The idea is to carry one half of the device in each pocket, ensuring a balance in bulge size, which Nintendo claims is much healthier for your posture and well being.

The device will come in Aqua Blue, Cosmo Black, and Charles Flesh.

The 3D, as reported, is flawless. Nothing can prepare you for the first time you hold the device in your hand and see a 3D image without the need for special glasses. The intensity of the effect is adjusted with a 3D slider which is quite handy, even if the kazoo sound it emits is a little on the loud side.

Pilotwings Resort - Take the Wii Sports location, add elements from the classic SNES title, and you've got a minimal effort title that will sell like hotcakes among newcomer Wii gamers and nostalgic nerds alike. We were particularly impressed by the disturbingly realistic high altitude drop body deformation physics.

Steel Diver - A clever and potentially amazing submarine game in which the 3DS serves as your sub's periscope. Stand in place, rotate, and the view will follow your every move. This should be a big hit with submarine captains that like to yell at fucking games for not getting things right.

No Depth Perception Joe 3D - In this creative title, you take on the role of Joe, a man with no depth perception. Solve over 10 sudoku puzzles in stunning 2D!

Bananaball 3D - Is it a banana, or is it a ball? Figuring that out is half the game!

Augmented Reality - This isn't a game so much as a collection of tech demos that will come installed on the 3DS. These mini-games use the camera to render your surroundings on the screen, then place game elements on top of the setting. In one instance, a flood of spiders puked on the demo booth and angrily swarmed my arm. In another, a tiny goalie kept pulling a ball away as I attempted to "kick" it with my fingers, calling me the C word numerous times. 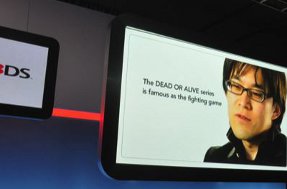 While we were certainly excited after spending some time with the 3DS and many of its launch titles, we weren't nearly as excited as Dead Or Alive Dimensions director Yosuke Koyashi:

"Jumping off a high cliff, you know just how high it is."

"Walking past a tree, you know just how tall it is."

"Looking at a cloud, you know just how far it is."

"Kicking your right leg, you know your left leg is on the other side of your character's body."

"Glancing at the health bars, you know they are above the game world."

"Following our characters' bouncing breasts, you will know how shallow our game remains."

DC Universe Online
If this was a single player action game it would be considered too awkward and imprecise, and if it had more focus it wouldn't be an MMO. 4/10

Mindjack
If you've ever tried mindjacking during a sleepover to maintain your body's needs in a stealthy fashion, this is slightly more satisfying, but doesn't go anywhere either. 6/10

LittleBigPlanet 2
Same controls, new levels, and content creation that's almost as open ended as that mining game that ripped off Zelda and Infiniminer. 7/10

Lost In Shadow
If this gets a re-release for Kinect, better let me attack enemies by making shadow puppet dogs with my actual hands. 6/10