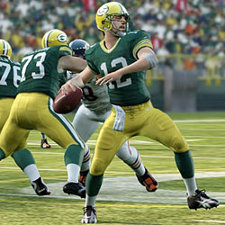 The video game press loves to simulate them some Super Bowls. Every year, dozens of sites pop in the latest Madden game and pit the two real-life Super Bowl teams against one another, then post the result.

The problem is, they only publish the final score. That's nothing. If this is really the most prescient video game of all time, how about breaking the game down and showing us every minor detail that was prognosticated?

That's exactly what we've done in this, the most in-depth Super Bowl prediction article of all time. All of the following happened in our simulated matchup between the Packers and Steelers, so we feel confident that they will all come true.

Bonus prediction before we start: This article's accuracy and resulting success will shame IGN into closing shop.

Magicka
An incredibly fun spell system with thousands of possible combinations, most of which blow the caster into bloody chunks. 9/10

Two Worlds II
By taking the game seriously this time around and making it technically better, they've made it less fun. 6/10

Bionic Commando Rearmed 2
When you want to explain how changing game mechanics for the sake of change isn't a good idea, you now have a perfect example. 6/10

Killzone 3
Now that I don't have to use the PS3 controller, this series is looking pretty good! 8/10