Modern Warfare 3 surprises absolutely no one by featuring A Shocking Moment.

You're undoubtedly familiar with the No Russian mission from Modern Warfare 2, where the player tagged along with a group that opened fire on civilians in an airport. In the latest game (Call Of Duty 8? 9?) they returned to the well by churning out another manipulative scene, and in doing so produced something offensive - not in the sense that it goes against any particular set of morals but offensive in that it is just as lazy, cynical, and far removed from the player's control as every single aspect of Modern Warfare 3.

I'm going to spoil the shit out of this. You should stop reading if you actually care about the 4 hour walk-forward-through-a-setpiece-explode-a-thon that is the single player campaign. 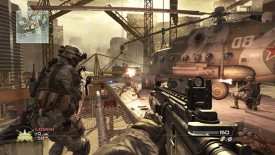 A Call Of Duty game from the past five years. Which one? Can't tell, doesn't matter.A war thing happens to a person under the age of 18. It's one of those war things where the person inconveniently stops breathing afterwards.

There you go. Manufactured controversy at its most obvious. Melodrama at its cheapest and least effective. There is no artistic intent, as that would require the slightest hint of artistry in a game which never puts in the work required to make its big ideas meaningful.

This series thrives on pandering and treating the audience as brain dead assholes that are mostly interested in playing the exact same multiplayer game that has slid out of Activision's ass for the past four years with sort-of new maps, a new set of levels to grind, and constant screen-filling messages of empty encouragement that would make Pavlov nervously tug at his collar.

When I was a kid I would occasionally get into a match of wits with a friend, naming things that could beat one another up. I'd pick Spider-Man, then he'd pick Superman, then one of us would go for a nuclear bomb, and eventually a black hole would show up. You've probably done something similar if you were as dumb and poor as me. Call Of Duty is the personification of this one-upsmanship. It is escalation for escalation's sake.

Adult tourists die in one game, a child dies in another. A building blows up, a nuke blows up, everything in the entire world blows up. One notable location becomes a war zone, everywhere is under constant attack by a thousand burning warships. It is completely hollow. While a couple of kids might play the Spider-Man/Superman game for a few minutes, Call Of Duty stretches the same idea out for years, adding nothing but clinical, technical fidelity upon every level of increasingly pointless pyrotechnics.

If I were a business man or an investor I would applaud, but as someone that actually enjoys video games and hopes they progress, I find myself bummed out that this will undoubtedly sell more copies and generate more discussion than something more thoughtful, like Saints Row The Third - a game which also has the crazy feature of giving the player control over genuinely fun, varied, and creative moment-to-moment gameplay.

Skyrim
It doesn't have the writing or carefully considered world of Obsidian's New Vegas and the melee combat is nowhere near as good as it could have been, but unlike Oblivion, Skyrim actually gives you good reason to wander a world that is interesting and varied. 10/10

The Haunted: Hell's Reach
Not bad for a free mod, not particularly good for a $20 product. 5/10

Modern Warfare 3
After a certain point, every explosion makes things a little less interesting - that point was the first Modern Warfare. 6/10

Lord Of The Rings: War In The North
More Dragon Age II (in a bad way) than Snowblind's earlier games like the excellent Champions Of Norrath, but there's plenty of decent chopping and looting fun to be had in co-op. 7/10

Disney Universe
LEGO meets Kingdom Hearts, and neither remembered to bring their appeal. 3/10

The Adventures Of Tintin: The Game
Sadder than a Maus game. 3/10