The End of Suburbia

Chicago has been one of the metro areas hardest hit by the job cuts and government budget shortfalls sweeping the nation. Foreclosures in the suburbs are epidemic and homelessness is on the rise. Entire strip malls sit vacant.

The signs are all around me that things are getting worse, but it's only been for the past month or so that I have been jotting down the symptoms as they appear. 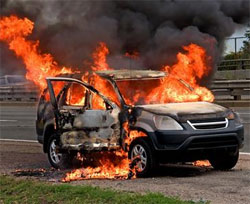 There is a man burning his Chrysler 300 in the turn lane because he is too weakened by hunger to complete the turn. He heaps road atlases on the passenger seat and sets them on fire. He begs passing motorists for food, his filthy fingers thumping softly against their windows as they swerve around his smoldering car.

Roadkill everywhere from all the feral pets being set loose. I count ten dead dogs and twice as many cats on my way to the gun store to buy high-caliber ammunition. I nearly wreck avoiding a pile of smashed turtles. Box turtles, feral, hunting in swarms. When it rains you can hear them by the hundreds scraping along the pavement to get at the earthworms.

Two toddlers have just convinced my neighbor's baby to smoke. The baby has been hanging around with the toddlers for a few days now. He bounces up and down in his swing while they talk about knives and girls. Moral turpitude among tots is a sure sign that things are in decline. The taller boy is showing him how to puff on the cigarette and exhale through his nose. They delight and make choo-choo noises. 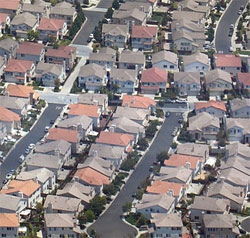 The neighborhood parrots have formed a gang. They sit in a tree and shout curse words late into the night. When a lady passes they comment on her ass and make the Xbox startup sound. One of them keeps repeating, "Carol isn't here. Carol isn't here." I wonder where Carol is right now. They've cleaned out all the gardens and now they're eating sticks, bits of gum, and a lady's wig. Or is that a scalp?

The police have blocked off the entrance into the subdivision and they're charging a toll. To get in you have to pay them a dollar. I just had a few pennies on the floor of my car, so the lady cop reached into my pants and felt my butt. She just stood there with her hand on my butt and we both looked off in different directions. After a while her hand started getting sweaty and then they let me go.

Everyone is excited about the garage sale. They have tables of stuff from their house set up in their driveways and yards. I hesitated, but ended up setting up a table for my animes. Nobody has any money to buy anything. In the afternoon a man with a machete robs the garage sale across the street and takes all of their baby clothes and VHS tapes. 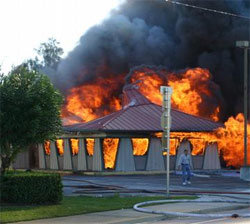 Foreclosure refugees collecting at the Pizza Hut. Somehow word got out that there was an assistant manager job opening. Everyone is wearing patched or homemade suits and ties. Business quilts. It turns out the job opening was a marketing ploy to get people interested in the new Pizza Hut Panormous Plus with 50% more pizza and 70% more crust. On my way home it's dark, but the sky is orange with the fire of the burning Pizza Hut.

It has been a week since any of the magazines have changed at the grocery store. The newspaper boxes are empty and the Nuggets behind the counter at the 7-11 are all the Mega Asses issue still. It's as if we've broken off from the rest of the world and we're slowly drifting away. Either that, or the rest of the world is dying too, and the thought of that is...well, it's worse than thinking of Carol abandoning her African Grey.

We cook a raccoon on the barbecue. A few of the neighborhood kids trade me a fabulous assortment of fireworks for the raccoon's browned snout. They bite into it so lustily they cut their lips on its teeth. I aim the fireworks at the trees and for at least an hour I have sweet silence from the chattering parrots. As the neighborhood becomes desperate for food the parrots are gradually dwindling. Not nearly fast enough for my taste. Somehow the parrots usually manage to talk their way out of trouble. 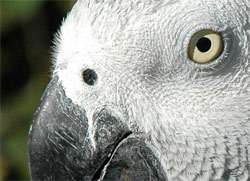 The baby is out by the burned ruins of the Pizza Hut. The toddlers are gone; I think they hopped a freight train to Wyoming. The baby's face is all painted up like what a woman might look like reflected in a rushing river. It's strutting back and forth, trying to sell itself to passing cars, but there aren't any. All the gas is gone and the bicyclists are known enemies of prostitution. The baby is lifting its shirt to show a man on a recumbent bicycle the word BALL written across its chest. The scene disgusts me and I have to look away.