Wednesday, Jul 14, 2004 by Dr. David Thorpe (@Arr)
Have you ever wondered what Dr. David Thorpe thinks about some of the most innovative and respected artists in rock and roll's history? Well, can't you guess?

The words “classic rock” have essentially become meaningless. The radio format bearing this title has mutated from playing venerable dinosaurs of the 1960s to playing an incomprehensible catch-all mishmash of Journey, Led Zeppelin, Nirvana and Boston. With fifty years of rock and roll behind them, the programmers of classic rock stations see fit to play the same thirty songs over and over and over again; people criticize pop radio for staunchly adhering to playlists, but at least on pop radio songs actually leave the rotation once in a while; sure, you might hear Lil Jon’s latest freaky sex joint fifty times a day, but unlike “More Than A Feeling,” you won’t hear it fifty times a day for the next twenty-five fucking years.

Despite the best efforts of AOR programming chimps, there are definitely a few bands which most people would agree make up the central core of classic rock. There are the pioneers of the Sixties, like The Beatles and the Rolling Stones; there are the individualist singer- songwriters, like Neil Young and David Bowie; there are the mega-selling monsters of the Seventies like Pink Floyd and Led Zeppelin. I may as well stop beating around the bush, because I’m sure you can all see where this is going. 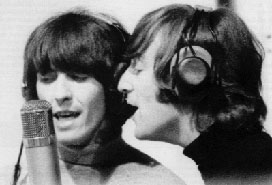 Lennon makes a move on HarrisonCritics of the Beatles generally fall into two categories: either they’re fifteen years old and trying to rise above their peers on the coolness ladder by iconoclastically bashing what they consider untouchable by criticism (the same kids who will later impress their friends by talking about what a hack Shakespeare was), or they’re humorless aficionados of jazz or classical who think of The Beatles as the four mop-topped horsemen of the apocalypse. Just because both of those types of people are retards, however, doesn’t mean that the Beatles aren’t shit. Yes, everyone knows that they started out as a fairly irritating pop band beloved by shrieking, frumpy teenage girls, but that actually isn’t why they suck. Things didn’t start getting really unbearable until John Lennon and George Harrison turned into pretentious, drug -addled proto-hippie cultists and Paul McCartney decided to start writing whimsical ditties. Ringo, of course, did not have to make any significant adjustments in order to suck. For every memorable “classic” Beatles song, there are five that are annoying novelty songs, four that are unbearably dated, three that are worthless R&B covers, two that are failed sonic experiments, and one that’s written by Ringo. If we wash all of those away from their dozen or so studio albums, we’re left with about half an album’s worth of decent material. We’ll throw in some mediocre old tracks, call it “One,” and it’ll move more copies than Kinko’s.

First of all, even aside from the fact that the Rolling Stones are now incredibly old, sad, ugly, and shitty: If you look closely, and just forget for a moment that they were the Rolling Stones, they were never actually any good, they were always just kind of okay. If you listen to Satisfaction, for example, you might notice that there is nothing really good about it. It just plods away like any other tune; there's a guitar riff that's easy to remember, sure, and lyrics that get stuck in your head. That's not good music, that's just fucking hypnotism. That's just repeating something until it washes up on the desolate beach of your brain like a suicidal whale. If you try to listen to their greatest hits record, you'll wind up skipping all the songs that aren't too great and that you've heard too many fucking times, and guess what: you'll have skipped every single song.. They’re one of the most striking examples of style-over-substance in all of rock and roll history, and they’re one of the most tenacious examples of overstaying one’s welcome ever to sell out a stadium as senior citizens. I’m not saying that everyone has to do like The Jam did and break up their band when they were all twenty-one years old, but it’s probably unwise to keep going until one’s band is easily mistaken for a traveling museum exhibition about mummies.

So: first Jim Morrison got really fat and strange, and his records started getting sloppy. Then he died. Then his band decided to piss on any sad little legacy he has as much as possible, first by being (especially in the case of that loony keyboardist guy) fucking nutballs, and then by getting the brilliant idea to reform the band with the dude from The Cult as the singer. I'm not sure if that ever happened or not, but Jesus; now I can't even think about The Doors without my brain just shutting off and saying ”Don’t think about The Doors, you’ll never figure out whether they suck or not! Too much trouble!” And if you truly can’t figure out whether a band sucks, the only reasonable thing to do is play the safe odds and assume that they suck. Case closed. 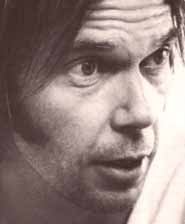 "Faggots, man! Potatoes!"For all his work with Farm Aid, one might uphold Neil Young as a true hero of the working class. It’s always sad when true heroes of the working class say things like this: “You go to the supermarket and you see a faggot behind the fuckin' cash register. You don't want him to handle your potatoes. It's true!” (From a Sept. 7th, 1985 interview with Melody Maker). On the “quotes that a musician will never live down” scale, that ranks just below Elvis Costello’s assertion that Ray Charles was a “blind, ignorant nigger.” Good luck, Neil Young, with keeping those faggots away from your potatoes as well as you kept audiences away from your god-awful indie film, “Greendale.” I’d also like to point out that there is probably no well-respected musician who’s put out as many absolutely worthless albums as Neil Young has in his lifetime. From the stale, insincere rockabilly of “Everybody’s Rockin’” to the laughable electronica of “Trans,” Neil Young has probably covered a wider and more dynamic range of shittiness than anyone else alive. Even Neil Young’s staunchest supporters have no choice but to feel nonplussed when confronted with the news of a new album; they may wonder, with good reason, “will it be a massive, steaming turd, just like most of his recent material?”; hopefully, they can take some comfort in my assurance that it probably will.

You know, it's honestly amazing to me when people accuse David Bowie of staying relevant all these years by continuously updating his style. No. No he does not. Every record he does nowadays sounds like something that some mediocre electronic pop band recorded five years earlier; he isn't staying relevant, he's cynically aping bits and pieces of whatever hip new style of music happens to pass his ears. Of course, he mixes it in with some standard David Bowie material and creates something that always manages to sound clumsy, outdated and dorky, like your mother getting drunk and singing “I’m Too Sexy” at her sixtieth birthday party.

This is me listening to Pink FloydI’m sure a lot of people have deduced by this point that a lot of what I say in these articles is nothing more than good-natured ribbing, and that I can’t really detest all of these bands as much as I claim to. Well, let me get one thing straight. I really, truly, and deeply in my soul loathe Pink Floyd. Their mind-bogglingly pretentious musical wankery makes Radiohead look like Smash Mouth. They engaged in, or in many cases were responsible for, just about every reprehensible, over-serious prog-rock abomination that you could possibly think of; they’ve got the double-gatefold concept albums, they’ve got the expensively animated album-film, they’ve got the children singing the lyrics, and they’ve got the notoriously high-concept concerts where workmen build a wall in front of the band as they play and shit like that. Rick Wakeman’s “Camelot on Ice” disaster, frankly, seems rather cute when compared to the kind of crap that Pink Floyd likes to pull. The music behind all these nauseating concepts is densely layered pop music for below-average high-school misfits who mistake spooky sound effects for creativity. Many teenagers go through a Pink Floyd phase in high school; if you were or are one of them, I’d seriously advise you to cut your losses and give away all your Pink Floyd records now, lest you become one of the creepy stoned burnouts who spend their lives wearing faded Floyd t-shirts like reeking albatrosses, forever unable to find gainful employment anywhere but a head shop.

Way back in the days when music critics listened to albums with the none-too-generous expectation that they wouldn’t be completely fucking terrible, Led Zeppelin got mostly unfavorable reviews. However, sometime in the eighties, when the rock and roll well had almost entirely dried up, Led Zeppelin’s critical reputation was somehow transformed; critics went back and re-discovered them, realizing that while they were objectively terrible, they sucked about ten percent less than the new stuff that was coming out. Through clever historical revision, Led Zeppelin has gone from a band loved by audiences but hated by critics (like Aerosmith or Creed) to a band that was totally great and ahead of their time. They innovatively combined the British blues-rock tradition of totally sucking with the heavy metal tradition of writing songs about fantasy novels. Genius!

That’s all for this week, but please heed what I say and take my word as gospel, because I know basically everything about music and you know hardly anything about anything. Drop those dusty old albums and buy yourself the latest smokin’ platinum hit by Usher, because he confesses things about having a baby with a one-night stand, and it’s some serious shit! If you have any questions, comments, or complaints, please e-mail me at davidthorpe@somethingawful.com, but please be forewarned that, in the event that you plan to disagree with me on anything, you’re wrong.