Wednesday, Nov 23, 2005 by Dr. David Thorpe (@Arr)
Classifying hipsters in the wild can be a tricky business to neophytes. To the layman, all hipsters look the same: they dress in stupid clothes, they dye their hair, they listen to awful racket, and they’re always having sex with each other. However, the trained naturalist will tell you that there are limitless varieties of hipster, each with his or her own distinctive plumage and mating calls. We hope that this excerpt from our entirely unscientific and fairly insulting guide illuminates the differences between several of the more populous species of North American hipsters. 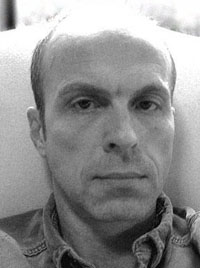 Contrary to popular belief, this is what punks look like.You may think you’re the punkest sonofabitch in the state, but you’ve probably never even seen a real punk in the wild. Fake punks aren’t just kids buying Blink 182 t-shirts and pre-ripped denim jackets at Hot Topic. Almost all punks are fake punks. Real punks are usually in their forties, they dress like slobs because they don’t care about being cool, and they hang out at concerts hitting on girls half their age. The difference between a real punk and a fake punk simply comes down to lived experience; teenage gutter-punks think that their stories of living in a car for two months when their asshole dad kicked them out are the most righteous tales of punkness in history, but it only takes a real punk thirty seconds to live in a car for two months.

There’s no cut-and-dry way to reliably tell a real punk from a fake one. You might see an old guy in sweat pants and a plaid shirt hitting on a pretty young hipster and mistake him for a real punk, but he might just be an old loser (although if the girl goes home with him, he’s probably a real punk). The most reliable way to figure out whether someone is a real punk or a fake punk is to listen to his stories. Use this handy guide:

Fake Punk: One time I hung out with Rollins after a spoken word show. He was a really awesome guy, he even bought me a beer, and I was only fifteen!
Real Punk: Did I ever tell you about the time me and Richard Hell set Nancy Reagan’s car on fire?

Fake Punk: When I was seventeen, my best friend died of a heroin overdose. It really made me stop and think about what everything means, you know?
Real Punk: One time I was awake for six weeks shooting up amphetamines, and I finally just blacked out from exhaustion. I woke up two months later in Anton LeVey’s walk-in freezer.

Fake Punk: Hey, you should come check out my new band, we’re gonna play the Veteran’s Hall on 12th Street next Friday.
Real Punk: I used to be the drummer for X, but I got kicked out after I fucked Karen Carpenter.

Musical Taste: They have a great affection for punk classics, of course, but they usually have bizarre reverence for some totally weird style of music. You’ll show up at a real punk’s house and see a bunch of Frankie Yankovic albums on the walls, and he’ll say to you “yeah, I have probably the biggest collection of polka records in the state.”

How to Tame a Real Punk: The hardest part is finding one. Once you do, listen to his stories with appropriate reverence without seeming like a phony. Hold up your end of the conversation. Drag him back to his house after he passes out. Let him hit on your girlfriend once in a while.

Benefits of Friendship: Once in a while he’ll call you up at 3AM and ask if you want to do something insane, like steal Hasil Adkins’s corpse or fly to France and piss on Jim Morrison’s grave. You can also sleep on his couch indefinitely, because he has no concept of private ownership. He won’t ask you for money because he’s inexplicably well-to-do, even though he dresses like a hobo and you’ve never even heard him mention work.

Drawbacks of Friendship: You’ll feel like a hanger-on. Your girlfriend will either be afraid of him or have sex with him (maybe both). His idea of a “prank” is to blow up your car (and he loves pranks). He has no sense of responsibility, and will get you fired from your job due to constant tardiness caused by all-night benders. 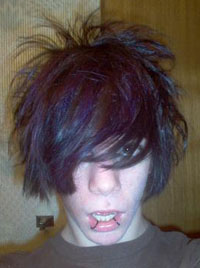 Yes, most of them are this dumb looking.To refer to emo as an entire subculture centered on being vain, melodramatic, pathetic, self-absorbed, and emotionally histrionic would be unfair. There’s more to it than that. There’s also all the terrible music, stupid haircuts, and fantastically complex MySpace profiles. While we can all conjure up a mental image of a stereotypical Emo kid, with a tight sweater, hair dyed black, tiny jeans, and converse with “deep” lyrics Sharpied on, it can be difficult these days to tell emo kids from any other scenester morons. Asking vanilla hipsters and emo kids to list their favorite bands would net similar results: a list of bands you’ve never heard of. However, an emo kid’s band list would contain telltale patterns. First of all, watch out for bands with melodramatic, complete-sentence names, like “I Die in Agony” or “His Heart is Sour.” Secondly, the list of bands will quickly transmogrify into a diatribe about how the emo kid doesn’t really want to be there because he or she is feeling very depressed over a girl/boy and Hawthorne Heights really helped him or her out during tough times and maybe you’d like to go back to his/her place and see his/her zines and maybe make out a little bit, no big deal. The great thing about emo kids is that they’re both promiscuous and emotionally crippled (except for the weird Christian ones).

Musical Taste: A broad banquet of crap. Some emo kids hate the other emo kids because they listen to new fake mall emo instead of the “good” stuff which was by bands from twenty years ago who never actually released any albums but were quite good nonetheless, according to third-hand recollection. Other emo kids listen to the fake mall emo and love it. I’ve met quite a few who never actually admit that they listen to emo: “oh, they sort of used to be emo, but they’re basically just indie pop now; oh, that’s not emo, it’s just sort of slightly emo-ish hardcore.” Jesus, you idiot, if you listen to six hundred bands that skirt the borders of emo, you basically just listen to emo. Fuck.

How to Tame an Emo Kid: Leave them flattering comments on MySpace. Listen to their problems. Be a member of the opposite sex and reject them (they love unrequited love more than most people love sex, so they’ll hang around you for-ev-er).

Benefits of Friendship: They’ll listen to your problems (for about three minutes, before turning the conversation back to their own problems). They’ll write you really bad poetry if they fall in love with you, which you can share with your sane friends for a classic chortle.

Drawbacks of Friendship: They are really, really into the terrible music they listen to. This is true of any hipster subculture, but a lot of emo kids have absurd tunnel-vision taste: they listen to only their shitty little niche of emo, and you’ll never get a moment’s respite from it. Regular hipsters will turn off the Wolf Parade once in a while and throw on some David Bowie, but emo kids will offer no such breaks: it’ll be straight from His Dying Words to She is Cruelly Dying to This is My Pain Area to He Cuts Me Deep.