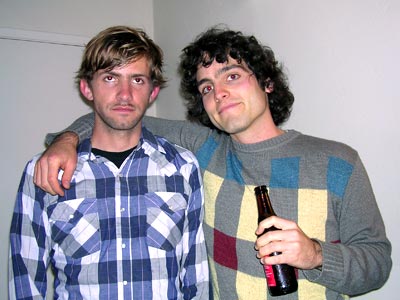 These morons will drag you to the worst parties...Even if you live in the wilds of the Yukon, there’ll be at least one shitty local band and at least fifty idiots who turn up at all their gigs and nod along to the music (the “beers in both hands” dance). In larger towns, there will be dozens of shitty local bands, and the scene will be bolstered by all the members of the shitty local bands turning up to see all the other shitty local bands when they play shitty local gigs. The local scene idiots will be at every show, fervently yelling out requests for songs that only members of their pathetic little stratum will ever hear. Coming from a small and sceneless town, I’ve experienced firsthand the horror of a primordial music scene oozing out of an extremely shallow pool of talent, and it’s a horrific, Cronenbergesque sight. The teenagers in this dead-end town, with no outlet for being hip, were forced to wrangle their sensibilities into enjoying some truly horrific music.

Local Scene Idiots are only cool to each other. If they go two towns over, they won’t get much mileage out of knowing all the members of Butt Attack personally, because Butt Attack’s rusty van can’t make it that far afield without overheating. In minor markets, local scene idiots can never rise above “big fish/small pond status,” but that’s enough for them. “Someday,” they tragically think, “when Butt Attack gets huge, I’m going to say I knew them when.”

How to Tame a Local Scene Idiot: Just start a band. It doesn’t matter how god-awful it is. The local scene idiots will be clamoring to interview you for their ‘zine or their pirate radio show before you can say Jack Robinson. Either that, or just be bored enough to go to some terrible local shows. After you lower yourself to attending a few, your scene idiot friend will call you up whenever some miserable local event is happening.

Drawbacks of Friendship: When you’ve seen every band in your town fifty times and they’ve shown no signs of improvement, you might begin to curse your local scene idiot friend for dragging you out of the house when you could have been watching Hard Copy in your underwear.

If you have any questions regarding the taxonomies or anatomies of hipster organisms, feel free to write to davidthorpe@somethingawful.com. Or if you have any really goofy pictures of misguided hipster morons, I’d love to see those.