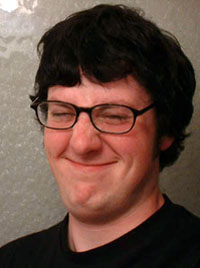 I bet this guy reads books about Def Leppard.Pop Nerds have an abiding love of everything canonically agreed upon as great by their peers, none of whom they respect. Their own taste is unimpeachable, and everyone else’s is dead wrong. They know more about bands they hate than you know about your favorite band. They know what label Jesus was on. They are torn between hating Rob Sheffield and secretly wanting to be him. They read books about books about music. Pop nerds are much more likely to be male than female, because boys have a far greater tendency toward wasting their lives in the pursuit of meaningless trivia. They fancy themselves as John Cusack from High Fidelity, but really they’re a perfect mixture of Jack Black and the effeminate bald guy. They can be tough to spot in the wild, because they never leave their houses. The most effective way to identify a pop nerd, should you encounter one in the wild, is to ask him if he’s heard of a made-up band. While any non-liar with nothing to prove would simply say “no,” any nerd worth his salt would try to bullshit their way out of it (as I have expertly detailed in my “How to Fake It” article).

How to Tame a Pop Nerd: Say something bad about a specific rock critic. Walk up to a pop nerd at the vinyl bin of your local ultra-hip record store and say “Greil Marcus is an idiot.” The pop nerd will take it as a cue to explain why he himself knows a million times more about everything than Greil Marcus ever will.

Benefits of Friendship: Access to record collections that often border on obscenely decadent.

Drawbacks of Friendship: Never, ever mention anything about music to them, unless you’re agreeing with them or intentionally setting them up to win an argument and boost their ego. In the rare instances in which a pop nerd becomes interested in a girl, he will ultimately fail in the pursuit and you’ll have to hear about it. He’ll make you listen to heinous crap that he has tricked himself into considering great, like Scritti Politti and Einsturzende Neubauten (which he can spell without looking it up). 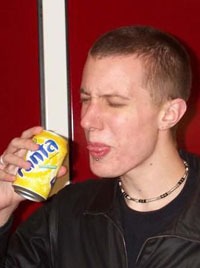 Not even FANTA is good enough for this asshole!Although far more subdued and tasteful that emo kids, indie nerds still clothe themselves in thrift-shop vestments, dishevel their hair, and slap on an annoyingly knowing smirk for maximum Malkmosity. They hate every band anyone else has heard of and hate every band they haven’t heard. They’re allowed to like a band that another indie fan likes, provided that they heard it before the other guy did. They loved The Shins until Garden State came out. They don’t dance, unless they’re dancing to hilariously ironic C+C Music Factory tunes (their music of choice, of course, is to be taken seriously, and should not be marred with the savage iniquity of dance). They have radio shows on college stations, and they do NOT take requests. They share a genus with the pop nerd, but with a narrower focus, an active social life, and a girlfriend. After fake punks, they’re the most likely hipster breed to be in a terrible band. But the indie fan’s band isn’t “terrible,” it’s “avant-garde.”

How to Tame an Indie Fan: When he’s raving about some great new band, pretend you haven’t heard of them, but that they sound really interesting to you. They love that. Let them make you a mix tape, and be prepared to give notes on it the next day.

Benefits of Friendship: Science has yet to reveal a compelling answer to this mystery.

Drawbacks of Friendship: Being friends with an indie fan is the only reason you’ll ever have to hear the words “Pitchfork Media” not immediately preceded by “boy do I ever hate…” Also, be prepared for some ill-conceived rants on “selling out” and “authenticity.”