Wednesday, Aug 07, 2002 by Rich "Lowtax" Kyanka (@TwitterHasBannedAllMyAccountsEver)
Know of an awful site? Send it to us and become a hero!

The World Trade Center Demolition and the So-Called War on Terro, submitted by Zandi. Just in case you guys haven't had enough utter wacko insanity today, here comes another rush of fresh new brain damage. The WTC attack, apparently, was caused by the CIA and not the evil filthy Arabs as us foolish suckers would so naively believe! The author of this wonderful website, whose name I can't find underneath the approximately 500 million words of nonstop nuttiness, is convinced that our evil government has once again pulled the wool over our eyes and opted to destroy the WTC because... well, I don't know! Just because! Perhaps they were bored! 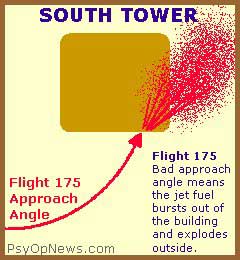 To put it briefly, a plot was hatched, not by Arabs, but by so-called Americans (agents of the civilian "state security and intelligence" agencies and bureaus such as the CIA, military intelligence types and high-level officials within the U.S. Administration), perhaps (some would say, almost certainly) with a significant degree of Israeli involvement:

to take control of four civilian airliners
to carry out attacks on the Twin Towers and the Pentagon causing huge loss of life
to make it appear that these airliners were used to carry out the attacks
to eliminate the passengers on the airliners who would not be involved in the operation except as reluctant witnesses
to blame these attacks on "Arab terrorists" and to use this as a pretext to launch military campaigns against "enemies of America" in the Middle East and in Asia.

Another possibility is that the Twin Towers were designed, or re-engineered, to collapse on demand, and that they collapsed because a deliberate order was given to initiate the collapse mechanism.

The demolition of the WTC was part of an ongoing plan (in effect since the Kennedy assassination if not before) to destroy the American Republic (what's left of it anyway) and replace it by a de facto dictatorship (as part of the drive toward a global dictatorship in the form of a world government).

Makes sense to me, Mister Homelessman Wearing a Tinfoil Hat and Shrieking At His Wristwatch! I've already got the racist skinheads coming to kill me and now I'm going to get the paranoid anti-government cornheads as well! I might as well shoot myself now and save them the time! RAOUWOOHOO!