Body Inflation Home Page, submitted by Jonathan. Just when you think the Internet has proven that there are no more stupid fetishes and backwards sexual deviations left to be invented, some jackass goes out and proves you wrong. This site is all about the wonderful art of ballooning people and cartoon characters up for reasons I cannot and hopefully never will be able to comprehend. Never. Ever.

Folks in cyberspace who know me know me as Luther Vincent Kane. In reality, I'm just the alter ego of a guy who'd rather remain anonymous for the most part. My interest in inflation goes back almost as far as my memory. Many of us have tried to pinpoint some instant, some turning point that fixed this fixation in our heads, with minimal success. Me, I've stopped asking. Suffice to say, I've learned to accept and enjoy. And, thanks to the magic of the Internet, I've discovered that there are others out there with similar interests. Granted, ours is not a common perversion but I was pretty relieved just to find out that I wasn't alone out there.

In the name of all things unholy, this site features a wealth of stories written by the world's next generation of isolated pervert writers. Choke on this literary gem:

"This... this isn't fair. This is against my will. Isn't it?" The tear in her blouse was 8 inches long now, creating a wildly exagerated V-neck with two perfectly round, slightly crushed breasts clearly wanting to explode out of her dress. Her blouse was now damp around her nipples, and every little struggle now created a squeaking sound between her wet breasts and the balloons.

The only part of my body that got hard after reading that was my fist, which if not for its tiny size and my general fear of pain, would have slammed madly against my desk. Of course things only get worse. There's art! I think the word "art" has been victimized enough, but these jackasses disagree. 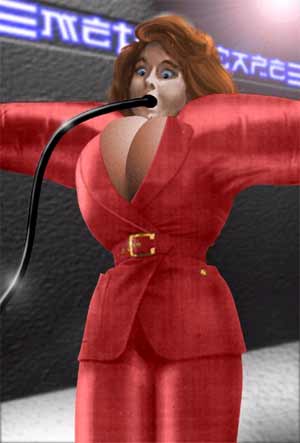 I don't know what's more obscene, the fact there is an air pump jammed into this woman's mouth, or that there is a lens flare thrown in for no reason. I think this site should be investigated as an act of terrorism against all that which is not "goddamn fucking stupid."