Monday, Jan 13, 2003 by Rich "Lowtax" Kyanka (@TwitterHasBannedAllMyAccountsEver)
Know of an awful site? Send it to us and become a hero!

G2k's Star Trek vs. Star Wars Tech Assessment, submitted by Scott. If I had to use two words to describe this site, I would choose "nuts" and "fucking," although not in that order. In addition, I would repeat the word "fucking" approximately 15,000 times for emphasis, as this is simply the most ridiculous and ungodly site I have ever gazed my eyes upon. Star Wars fanboys are pure evil. Star Trek fanboys are pure evil with double the grease amount. You combine these two forces together and you get what is easily the worst website I've seen in at least nine hours. 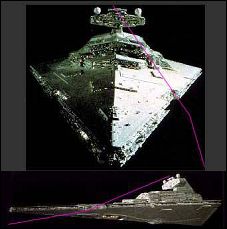 The above image occurs about one frame before the impact of the left-hand log. The right-hand log has already begun colliding with the extension on the side. As you can see to the right, the width of the chin gunwell is 53.3 pixels ('Pythagorized' due to the angle). The top outer corners of the viewports measure 93.3 pixels. The angle of view evidently produces some distortion, since getting a meters per pixel figure from the chin gunwell gives us 0.0212 m/px, whereas the viewports give us a mere 0.0188 m/px. I shall use the larger figure in this instance, and given that the logs are a bit more distant, I shall bump that figure up slightly to 0.022 m/px. The diameter-line of the left trunk is at an angle, but is reached by two corners of a box 67px by 10px. Overestimating slightly, we arrive at 67.75px for the diameter of the log. At 0.022 m/px, that gives us a log diameter of 1.49 meters . . . 1.5 for short. Note, of course, that the log's end is much thicker than the remainder . . . but nevertheless, the full 1.5 meter figure will be used. Now to the length. Unfortunately, we never get a perfect shot of the entire log. But, we do see the lines which suspend it, and can make a reasonable guess. The distance from the rope to the edge of the trunk (before the point starts) is 94.7 pixels. At 0.022 m/px, that's a hair over 2 meters.

The only clear shot of the entire log is in the frame above. I am assuming that the front and rear anchor points are the same distance from the edges of the logs, which not only appears to be the case, but also makes good sense under the circumstances. If so, then the length of the log is approximately four times the length from edge to rope. We'll give it 4.5 for safety's sake.

So, we arrive at a log which should be nine meters long. That, with the diameter, works out to a volume of 15.9 m3.

Now, to figure out the mass, all we need is the density. According to this PDF published by the United States Forest Service, a wood's maximum possible density would seem to be about 1,750 kg/m3. (The highest I've found mentioned elsewhere for wood that's still "green" (i.e. with high water content as opposed to the dried-out, lower-density wood as used for construction) is from another Forest Service publication, which had a particular species of oak in the 900 range.) 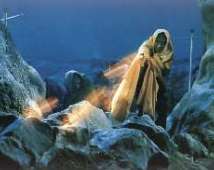 It should be noted, however, that the density could not have been extraordinarily high. The trees had to have been able to stand upright when living, of course, but we must also consider the fact that the Ewoks weren't exactly working with Kevlar rope. As seen below, a simple stone axe was sufficient to cut the main cable holding the logs in place, and it is likely that a similar material was used to suspend the logs. Unless a mind-boggling array of pulleys was being used, this could place some severe limits on the mass of the logs.

That, friends and neighbors, is not even 2.1 megajoules, but we'll call it that for short. (Note: With a wood density of 1000 kg/m^3 (which would seem to be a more common high-end figure), the KE would drop to a mere 1.2 megajoules.) This is roughly equivalent to a 2300kg minivan (such as a Chevy Lumina minivan) crashing into the cab at 100 miles per hour.

So what is all this analyzing? THE SCENE FROM "RETURN OF THE JEDI" WHEN THE AT-ST IS SMASHED BY AN EWOK LOG. You'll be pleased to know that if the Earth is ever invaded by Evil Death Star AT-STDs or whatever, we'll be able to take the bastards down with conventional M829A2 anti-armor rounds according to this website. Now I have an entirely new reason to lobby Congress for the legalization of owning Abrams tanks (besides the fact that Zack won't shut up until he either gets a tank or gets run over by a tank).

PS: Make sure to check out the nerd fight on this page. Whenever you're feeling depressed and think you're a worthless heap of dork, keep in mind that AT LEAST YOU DID NOT TAKE PART IN THIS DEBATE.

PPS: Also take a look at the 500,000-word essay on the horsepower of the Millennium Falcon, an article which will debunk all the myths and misconceptions you were taught in school and church regarding Han Solo's pimpmobile.