Elfwood, Fantasy Art, Fantasy Art, submitted by Marty. I should be the last person on Earth to criticize someone's artwork. I can barely put together a decent stick figure (I have trouble with the heads), so anyone with even the slightest bit of artistic talent has a edge on me. And if they choose to use that slight bit of artistic talent to draw large-breasted fantasy women with disproportionate arms and legs that bend in nearly impossible poses, so be it. However, I am not here to poke fun at Karl A. Nordman's art (as overly Photoshopped and cliched though it may be); I'm here to express how much I hate Karl A. Nordman for his writing. Every piece of work on his site has a fantasy introduction that Karl wrote himself. He should be shot in the face once for each of them. I have a relatively high tolerance for cornballitude, but this stuff seriously makes me wretch.

Immortal sorceresses come into conflict as the universe reels from the release of such awesome power. Thunderous concussions and immortal fire summon mystical beasts of such disastrous & destructive force. The griffon and the gargoyle will serve their mistress until absolute victory or certain death.

The angel of vengeance has found her mark. Her ghostly raptors harry the target as she raises for the shot. The arrow she draws is the wrath of God drawn upon the bow made and empowered from the sorrows of the transgressed. The arrow shall pierce the heart of the wicked so that they shall feel the torment and see the anguish of their transgressions done, so that they may repent and avoid eternal damnation. 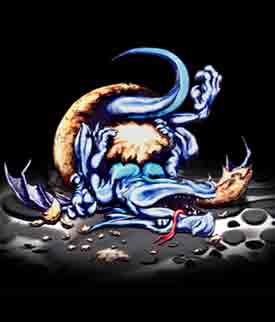 The intros are all like that, if not worse. Some, like the one above, make his work sound epic and overly exciting. Others just make no sense. The introductory paragraph to the site itself is pure comedy gold. It's sheer nerdliness is increased exponentially by the fact that the only picture of himself that Karl put on the site has him dressed as Data. 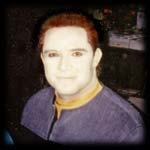 The amazing thing is, people worship this guy! After every piece of artwork is a whole slew - sometimes even a slew and a half - of comments pouring adulation onto Karl as if he was their Elven king.

WOW this is sooooo kewl! He looks dangerously playful. Your dragons must be mammles instead of reptiles if they need milk.

And it goes on like that. I've never tolerated idiocy on this fair Internet, and I'm not about to start now. These people are morons. You can Go see for yourself, but don't say I didn't warn you.