The Official Home of the Million Dollar Man, Ted Dibiase

Wednesday, Jan 15, 2003 by Rich "Lowtax" Kyanka (@TwitterHasBannedAllMyAccountsEver)
Know of an awful site? Send it to us and become a hero!

The Official Home of the Million Dollar Man, Ted Dibiase, submitted by Me. I did a search for "The Million Dollar Man, Ted Dibiase" in the article above, as I wanted to catch up on my favorite retired WWF wrestler from the 1980s. In case you have intentionally blocked out all memories of Ted Dibiase, he was a very out-of-shape man whose trademark WWF gimmick consisted of him "owning some money." This gimmick infuriated hardcore wrestling fans, as they weren't nearly as wealthy or charismatic as Ted Dibiase, who could pay off referees into making bad wrestling calls or claiming he was "charismatic." I don't think Ted Dibiase ever actually won a match or even wrestled anybody for that matter. He got up in the ring, insulted the audience for 10 minutes by demanding they get back to the welfare check line, and after his speech was over he had somehow beaten his opponent by using the power of, uh, money I guess. Money is a magical thing, some say. However, Ted Dibiase recently found Jesus and that's more wonderful than any million dollars a man could give you! 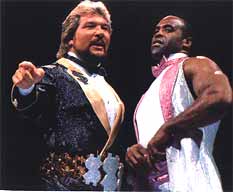 Heart of David Ministries is a ministry of evangelism and encouragement. This ministry was birthed in the heart of Ted DiBiase when he came to realize that God had called him to the ministry. Ted identifies with the life of David in the Bible. Like David, Ted fell into sin and had to be humbled by God before recognizing the depth to which he had fallen. And just like David it was at this point that he repented and turned his heart back to God. In the Bible God says that David is a man after His own heart. It is Ted's desire to have just such a heart. He realizes that it is the condition of the heart, more than any thing else that counts most to God. Thus the name for his ministry became, Heart of David Ministries.

In his heart Ted believes God has said to him, "I have raised you up for a time such as this." Having been one of the top stars in professional wrestling over the last decade, Ted believes that now, when three of the top five shows on cable television are pro wrestling, and the quality and content of most of the wrestling being viewed today is disgusting, he has been called to be a voice in our nation and the world, speaking the truth of the gospel and the love of Jesus Christ.

Oh Ted, you were so cool when you were obsessed with money, and then Jesus came into your life and changed you into a big wuss! Go back to eating Ding Dongs via forklift and wiping your ass with Ben Franklin's face. I mean literally, go dig up Ben Franklin's corpse and wipe your ass with his face, that'd be some quality entertainment! It'd be better than a Baptism at least.