Tuesday, Mar 18, 2003 by Rich "Lowtax" Kyanka (@TwitterHasBannedAllMyAccountsEver)
Know of an awful site? Send it to us and become a hero!

Peace Druid : Walking for World Peace, submitted by Peder. Many people employ many different methods to express their desire for world peace. Some groups donate large amounts of money to impoverished, third-world country residents. Other associations lobby Congress and various branches of the Federal government in an attempt to share their views. Peace Druid walks. Yes, you read that correctly, Peace Druid believes that walking around with a plastic dinosaur and a stolen hotel bathrobe reading "PEACE DRUID" will somehow result in the human race spontaneously refusing to shoot or stab other members of the human race. 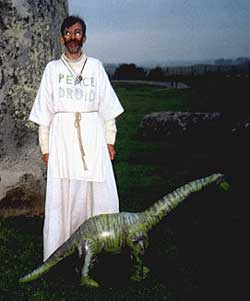 Hello, I'm Peace Druid, a wanderer until there be no more weapons of mass destruction on earth or in space, walking until offered shelter, fasting until offered food, accepting money only for my Peace Chest. I took this vow on 9 September 2001, at Milton Keynes Medicine Wheel's first anniversary. Thus usually staying for one night at any one place, and usually no more than 7 nights. As you can see, I wear a white robe, with a white tabard emblazoned with green PEACE DRUID. About my neck are several holy symbols representing the twinned religions of peace: Buddha, dragon, cross, ankh, and pentagram. These symbolise the unity of goodness and wisdom at the highest spiritual level, regardless of the form that such goodness and wisdom are expressed by people of different religions on the physical plane.

Now I do not claim to possess the most advanced logical skills, particularly when compared to geniuses such as Neils Bohr and people who are able to powerlevel their Dark Elves in Everquest, but I fail to see the connection between walking around with a tiny inflatable dinosaur and world peace. If he hits the "5,000 miles walked" mark, will all mankind suddenly ascend to some terribly exciting new plane of existence? If so, will we be forced to wear "PEACE DRUID" dresses and adopt plastic dinosaurs? I really hope not, as my cats would claw that thing to shreds. Regardless, I wholeheartedly support Peace Druid's (aka "Kreb Dragonrider") vow to walk until his walking somehow creates peace. Walk, Peace Druid! Walk for everlasting peace!