GI Joe Killaz, submitted by Kobalt. Hardcore gangsta rap done by Cobra? Well, not quite, try "inept and slightly amusing nerd rap done by three white youths in GI Joe Cosplay" and you're getting a lot closer. GI Joe Killaz is a rap group consisting of Destro, Cobra Commander, and The Baroness by way of your local highschool's chess club. This idea seems fairly good on the surface but their efforts to "thugg out" their lyrics are pretty sad. The Baroness is hot though. 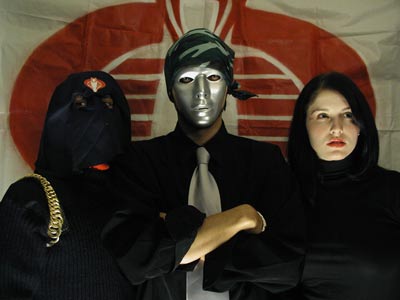 This Friday night G.I. Joe Killaz are going to be bustin' hella lazer gun shots inside The Trasheteria in Peterborough! If you haven't seen the Killaz live, this is your chance! Bring your lazer guns and wear your Cobra balaclavas! Also on the bill: The man, the myth, the stranger roaming around in your backyard... Ghetto Dice!!

Their "best" song is probably "Eau De Cobra" which features a back-and-forth rap between Destro and The Baroness. The idea is amusing enough but the execution is embarrassing and the gimmick only lasts about five minutes before you realize "hey, it's an especially shitty rap group in bad costumes". That's when you play some more Sisqo, because dammmmmmmn girl got dumps like a truck, truck, truck and thighs like what, what, what!