Monday, Sep 08, 2003 by Rich "Lowtax" Kyanka (@TwitterHasBannedAllMyAccountsEver)
Know of an awful site? Send it to us and become a hero!

Spells and Magic, submitted by AnarchicBunny. I have often cruised this mortal information superhighway in search of one single resource that could provide me with spells and incantations that would release the dark overlord Satan into my bathroom, yet also contained such insightful articles as "Garlic vs Evil" and "Puzuzu Pleiadian Music" which was written by an immortal ghost alien on the Internet. Puzuzu is a 43-year old "Avatar" who is "a cross breed of Arcturian and Pleiadian," which I think is fancy talk for "very stupid." Puzuzu's helpful site will aid you in your quest to not only summon demons, but additionally allow you to travel through time, hypnotize people, make blood sacrifices, and copy really fabulous animated gifs to your desktop. Do you want to know how to lose a ton of weight without changing your diet or exercising or exorcising? Well here you go, buddy: a handy little weight loss spell! 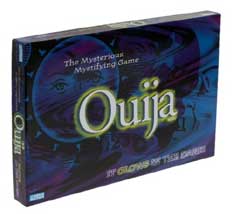 Stand in front of a mirror and put your hands on your stomach. Chant these words with feeling:

Godess hear my plead,
Make me the weight I want to heed,
This size is to big for me,
A size (size you want to be) I want to be,
So Mote It Be

Once you do this you will feel a funny feeling in your stomach and your cloths will be to big (or if there to small for you the right size) for 6-7 hours This is tested and works really well as me and my friends have tried this and it is really good. Thats why we put it in my B.O.S (Book of Shadows). One last thing MAGICK RULES

Yes! MAGICK RULES my dear mystical little Internet friend! MAGICKS RULES THE SCHOOLS! I'm not sure what happens if you chant the aforementioned words without feeling, although I suspect that you'd find yourself in a rather uncomfortable situation like that one episode of "The Twilight Zone" where the dumb lady tried to cast a spell on somebody but it backfired and then she ended up making her own website which provided spells and magic animated gifs. Perhaps it's just my skepticism or negativity, but I'd be pretty cautious to place my faith in a magic spell written by somebody called "K@ze" who has an AOL email address. That's not to say that AOL members aren't able to pull of incredible spells and feats of raw magic; I've known plenty of AOL members who could shoot lightning bolts from their hands and still have time left over to ask me "ASL/????" repeatedly. I'm sure there are hundreds of chatrooms full of the most magical AOL members in the history of electronic communication. What I'm trying to say is that maybe, just maybe, the spells on this site don't work exactly as promised. I said that fucking weight loss spell 50 times in the last day and my "cloths" haven't grown a single inch. On the positive side, Satan is in my bathtub right now. He wants me to tell you he has a very large penis. So Mote It Be!