The Big Nose Appreciation Page, submitted by discount dirt. I'm a Jew. If you get my entire extended family together in one room, you've basically accounted for seventy-five percent of the nose matter in the world. Some people would say that we're horrible stereotypes. Others would say that by even making that introductory joke, I'm perpetuating a hurtful myth, discriminating against my own people, and generally just being one ass of a bastard. And then there are others still who would say that my family is comprised of one sex idol after another. And those, my friends, are the people who frequent the Big Nose Appreciation Page. They find nothing more attractive on a person than a big ol' schnozz just ripe for the honking. This site is packed to the brim with plump proboscises. From hundreds of screencaps from TV shows and movies to animated Poser videos of noses growing to the inevitable pages of morphs that range from the... uh... this-like: 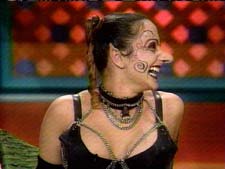 To the wonderfully sublime:

And just about everything in between, whatever the hell that means. If you think that having a larger-than-average capacity for snot containment and transportation is sexy, too, you can even talk about your weird obsession on the Big Nose Appreciation forums, where you can find scintillating conversation such as this:

I like big noses, especially when the person is able to flare the nostrils at will. I like it because it's interesting to see how the look of the nose changes and, of course, because the nostrils are bigger! I've read that only 30% of all people are able to do that, so I'm happy to be one of these. *lol* I'll post some pictures of my nose (flared/unflared) very soon. Who else is able to do this funny stuff and are there any pictures of that?