Gem Sweater Collection, submitted by Sttuffy. If you've ever wondered what Hell is like, I think that it's probably something like this. Leslie Hall, who I can only describe as looking like "somebody's unfortunate aunt," makes and models various gaudy looking sweaters that I'm willing to bet are probably itchy. The real kick is her modeling, which has about as much emotion as a warehouse full of microchips for murderous cyborgs. She sits in perfect stillness in each picture, modeling dozens of sweaters but never in a different pose, and always wearing the same shiny gold tights. I suppose that's all part of the marketing gimmick, to be some sort of ironic modern art piece, but the results are terrifying no matter how lofty the goal. It's awful, regardless of how arty the intentions were. 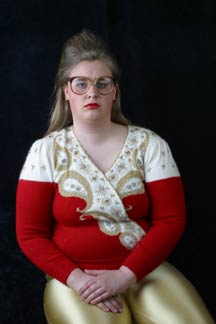 These pictures are more chilling than the Iraqi prison abuse photos, and would only be less chilling if the American guards forced the Iraqi prisoners to wear these sweaters instead of hoods.