Wednesday, Jun 16, 2004 by Jedidiah (@notoriousamoeba)
Know of an awful site? Send it to us and become a hero!

ETfriends.com, submitted by Pootie. Join Joan Ocean on a voyage of discovery as she reveals the secrets of the alien life forms that reside in the depths of our planet's oceans. See her astonishing evidence which consists of photos of clouds and artwork that looks like rejected designs for Journey album covers. Oh and did I mention that Joan can talk to dolphins? I can't imagine dolphins would have very much to say other than "I like eating fish." and "Jesus, lady, stop talking to us about ufos." 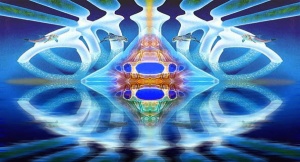 Now we are in contact with the neighbors of the Dolphins, the Light Beings from other realities. These are inhabitants of other planets and stars, of other planes of existence. They exude all of the same pure and gentle qualities as the dolphins. They are pod oriented, loving, playful, intelligent, multidimensional, masters of their personal and group powers. They live cooperation and altruism from their core, within a deep consciousness of universal laws. They bring us together, remembering and activating our interdimensional DNA. They are our dear and loving friends just as the dolphins are.

I'm not going to dispute any of the claims this woman makes on her site. I'd rather believe dolphins are secretly in league with extraterrestrials than face the possibility that there are people out there who are crazy enough to make this stuff up. The whole dolphin/ufo connection reminds me of the Sega Genesis game Ecco the Dolphin, which then reminds me of how much of a nerd I am. Thanks, Joan!