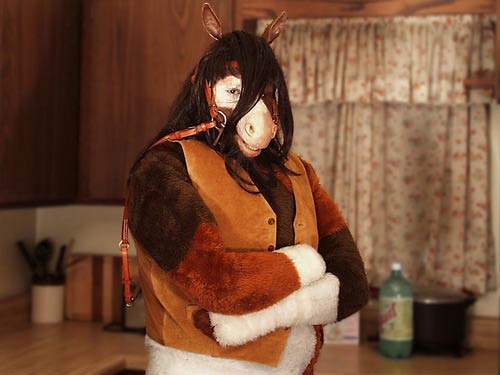 Holy shit! That is scarier than any horse that any of the Four Horsemen of the Apocalypse could ever mount. What's more, a lot of furries comment on each other's costumes while participating in the great equalizer that is democracy.

It's good, perhapse.. too good. Scared the heck outta me. Then again, I've never had a good experiance w/ horses. Still gave yah a 10 though for how realistic it is.

Something about this comment in particular causes me a great deal of anxiety and confusion. I've looked at it from as many angles as possible, and I still end up feeling clueless. I suppose that's a good thing, since I really don't need to know what kind of bad experiences with horses this person has had. Especially since this is a furry site. At least, though, he was objective and did not let those bad experiences get in the way of complimenting the quality of this ghastly costume. Furries are definitely a low point in human history, but hopefully one that we can eventually erase all memory of with brutal yet necessary force.