NBA Heartthrobs of the Future 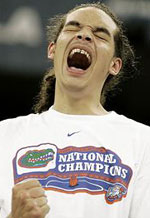 The Four-One-Wizzle: Look out, ladies! This funky-fresh forward-center might come from Cameroonian ancestry, but his game sure doesn't wallow in political corruption and stifling poverty! In fact, Noah, who was once arrested for stealing railroad spikes after smiling at a police officer, is a leader on and off the court. That makes him a valuable asset to any NBA team, especially if the coach is white!

Ballin' may take up a big chunk of Joakim's time, but that doesn't mean he doesn't like wooing the ladies. Although he's never had a steady girlfriend (he says he "just can't find a girl with a thick enough tongue or an affinity for fresh cold sores"), he dates often and may just be ready to make a commitment once he hits the big leagues. Believe us, Joey-boy: We know more than a few girls who'd love to spend a romantic evening gazing into your left eye and the right side of your nose! Often referred to as "a big man with a guard's moves" or "Jonathan Bender without the jumpshot," this hard-hustlin' hottie and two-time NCAA champ is ready to make his mark on the big leagues - and your heart! 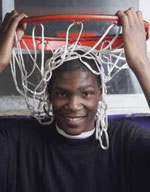 Favorite Pastime: "Making myself in create-a-player in NBA 2K7 and doubling the Celtics' team statline."

Most Embarrassing Moment: "The time I got confused my entire freshman season and thought the NCAA shot clock was only 10 seconds - whoops!"

The Four-One-Wizzle: He may be the sexiest Texan this side of David Koresh, but Kevin Durant's no snob. By his own admission he's "freaked more fat bitches than Tom Arnold" and knows from his religious training at Oak Hill Christian Academy that "A man who doth not throw an ugly chick a bone will have to pass his johnson through the eye of a camel." That down-to-earth outlook made this big man on campus greatly popular with the big girls on campus: Statistically speaking, he's shared romantic time with one-fourth the total student weight of the University of Texas!

K-Smooth's humility also applies to his basketball skills. Think getting compared to NBA legends Tracy McGrady and Kevin Garnett went to his head? Think again, LaQueesha! When we told him about the comparison he cocked his right eye towards the ceiling and said "I hope I don't injure my back committing a petty crime" - those scouting reports failed to mention his knack for impression comedy! 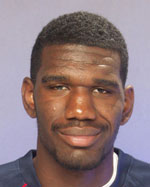 The Four-One-Wizzle: We know what you're thinking: "How did the walking trees from 'Lord of the Rings' get so sexy?" Well, sweetie, you're not swooning over a mystical Dutch Elm... that's OSU superstar and future NBA hottie Greg Oden! The Indianapolis native, fresh out of a cosmetic procedure that moved four inches of his right cheekbone to his left temple, is looking to impress NBA scouts and the ladies with his skills.

"I used to get by mackin' on them dumb girls, tellin' them I was Lebron James and I just headbutted a beehive," he said. "Now I get trim tellin' 'em I'm gonna be in the NBA soon. I just don't mention I'll probably be playing for the Hawks." What a smooth talker! Just goes to show you don't need a level head to be level headed... if he does end up in Atlanta, maybe he can teach Shelden Williams a thing or two on the subject!