Baba Sword, submitted by Jip_Bip_Jo. I don’t know if this website is called “Baba Sword” or “Baba’s Word”, but it would probably be cooler if it was “Baba Sword” because that sounds like a power-up from Rygar.

When it comes to this site it is pretty cool. I don’t like rap music very much other than Dr. Dre and Snoop Dogg songs about chronic and drinking with women. I definitely don’t like white rappers very much. This site is different though because it takes Chaucer and medieval times and then Baba writes songs about them. Sometimes they’re funny and other times they really transport you back to the time of damsels and danger. 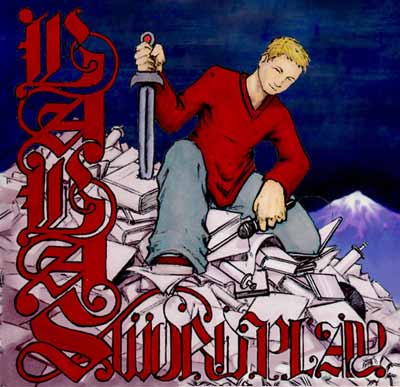 Beneath the tree they found a bag filled with glorious gold.
The hoard was more than forty-fold their wildest dreams,
And they smiled like demons hatching violent schemes,
While the steam from their previous plan was dissipated;
They were so fixated on the gold it just abated.

Overall I would probably rate this site like a three out of five. I think the music is okay, the lyrics are pretty awesome, but the website is kind of lame looking. One thing I don’t like is that he writes all these raps about medieval times and yet I don’t see a single song about barbarians. What race of mighty warriors has contributed more to the axe-wielding awesomeness of medieval times besides barbarians? Maybe Vikings, but that’s the only competition really.

In the end I think this music is pretty good music to get you pumped up when you’re in the dojo. I will probably burn it onto a CD and take it to Jim Kwon’s downtown when me and Keith go to freestyle workout and practice with our great swords.