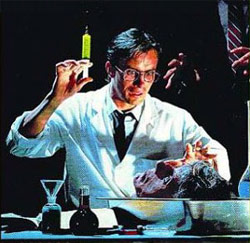 A wise man once said, "The cure is sometimes worse than the disease." I don't remember exactly who the wise man was, probably either Upton Sinclair or Stone Cold Steve Austin, but the point is just as relevant now as it was during Wrestlemania XIX. The effectiveness of marketing and communication has allowed modern snake oil to be sold by mail, on TV, and through the Internet.

The 21st century man is afflicted with all manner of questionable ailments and these questionable ailments require questionable cures. If you're a little fidgety at night you have restless leg syndrome and you need a medication to treat that. If you eat too much and gain weight you'll need a pill to shed those pounds, a pill that comes with side effects like, "might suddenly cause your body to stop being alive."

Those two examples are both real medications, but it only gets worse when you peer into the seedy underbelly of healthcare known as alternative medicine. Quackery and danger abound. Traditional and homeopathic cures are rarely better, offering false hope and superstition in place of the sound medical science that gave the world mercury tablets.

Today we draw back the wizard's curtain on the Ten Most Awful Cures. They may be pills, medical treatments, therapeutic concepts, or something a little unusual, but they each deserve a historic place in the stinking annals of bad medicine. 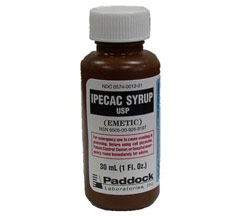 Syrup of ipecac is the best-known in a long line of "emetics," a category of medication used to induce vomiting. Ipecac has been making us puke our guts up for over 200 years and its popularity has increased in recent years.

Ipecac's one good use is to make people (usually children) vomit after they have ingested a toxic substance. In the 19th century ipecac was mixed with opium to create Dover's Powder. Despite the name, Dover's Powder was a syrup that was used to treat, well, pretty much everything, from cancer to the common cold. Back in those days every liquid that a person could drink was mixed with opium and heralded as a panacea, so you can't really hold that one against ipecac.

So far so good, it would seem, but for people of a certain age ipecac is the stuff of nightmares. The opium fad had ended in a tragic pile of drug addicted Chinamen and dead cowboys, but ipecac stuck around. During the first half or so of the 20th century syrup of ipecac was a common item in every house's medicine cabinet. Whenever a kid complained of a stomach ache or some other vague malady a doting mother would give them a spoonful of ipecac and they promptly barfed their guts up. 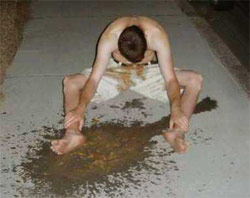 Pediatricians eventually realized that induced vomiting is not necessarily the best way to cure every disease known to man. Through careful research they discovered the interesting concept that specific maladies need specific treatments rather than just puking constantly. It was difficult to accept at first, because puking was just so therapeutic, but the not-always-puking idea proved just crazy enough to work.

Parents have since discovered a variety of medicines to force down their kid's throats. It turned out the world still had a need to hurl and, luckily, the crazy hillbilly ipecac manufacturers chewing up ipecac root and spitting into bottles were there to fill that need.

These days ipecac is still around to make poison-gobbling youngsters puke, but it has become popular with bulimics who consider puking a fitness regimen. It turns out ipecac makes a great post-binging digestif, only instead of helping digestion it helps great mashy wads of Twinkies and pizza fly out of eroded gullets and past acid-etched teeth.

Then when a dumb model dies looking like someone that got crossed off Schindler's List we get to hear that one fat supermodel talk about how terrible it is that women have to feel bad about eating a hoagie. Then I feel guilty for jacking off to a drumhead of tanned skin stretched over kindling and silicon and pelvic bones. Thanks for that, ipecac.