Wednesday, Oct 01, 2008 by Andrew "Garbage Day" Miller
Know of an awful site? Send it to us and become a hero!

The Baltimore National Aquarium's 4D Immersion Theater Web site isn't as tragically ugly or offensively ignorant as the average Awful Link of the Day recipient, but it deserves preemptive censure, given that it would be spraying viewers with salt water, fondling their calves under their desks, and skunking them with fish stink if it were technologically feasible. Until that day, the 4D Theater must settle for assailing physical visitors with "mist, wind, snow, bubbles, steam, leg ticklers, scents, and seat vibrations." The seat vibrations must be whiplash-inducingly violent, because people with back problems must "use discretion." Also, an image search for "leg ticklers" generated mostly sex toys and pornography (Czech Ticklish Girls: "Merciless ticklers her tortures all over body. I am want know how to ticklish are her armpit. Jane and Barbara tickle her feet. Kate cries: 'No, already fairly!'"). 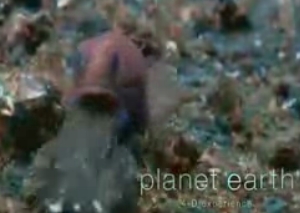 Imagine this fish's vomit flying right into your face! That's fun -- the 4D way!Baltimore's 4D Theater hopes to separate itself from the leg-tickling masses with the upcoming attraction The Polar Express, which promises "an icy cool blast of air" (just what Northeasterners need indoors during November and December!), a "dancing parade of chefs," and "the savory aroma of warm hot chocolate." Is the "warm" necessary, given the implied temperature of "hot chocolate"? Won't the dancing chefs drop their delicacies while navigating a darkened theater, especially if they're surprised by icy blasts of air? Baltimore-based readers must answer these questions, because 4D Immersion remains (mercifully) an in-person-only option.