Submitter Fonzie Scheme first encountered Paul Nosak during an accidental late-night viewing of Saw for Hire, during which Paul and his crew "protect you and your family from the deadliest vegetation on the planet -- trees." When not starring on "Tulsa's only reality-based TV show," Paul Nosak campaigns to become Oklahoma's next Lt. Governor, because nothing says "electable official" quite like a saw-toting madman who signed off on the sale of "womens panty" emblazoned with the phrase "Got wood?" Anyway, it turns out that his weird anti-tree stance is far from the most controversial part of his platform. Nosak endorses death penalty by firing squad -- "bullets are cheaper than kilowatts" -- and recommends castration (presumably by chainsaw) and facial tattoos for child molesters. 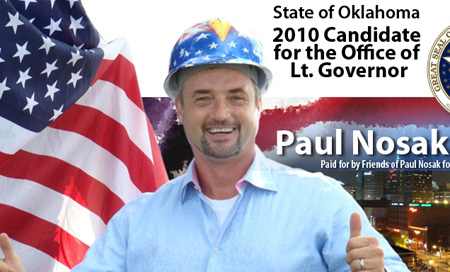 With regards to immigration, Nosak says "teach them English and make them pay taxes while we figure out the rest." Apparently, Nosak himself is still in the "being taught English" phase of this plan, given that everything from "elligible" to "St'Loius Arch" appears on his page, to say nothing of the constant glaring grammatical errors. Despite his linguistic shortcomings, Nosak dabbles in poetry. During this video, he dons a hardhat while reciting a piece that begins "We'll put a bullet in their eye, and a Mack truck up their ass/cause we're the best damn country that God has blessed," while a very, very small crowd of people mills about at an event called "Tea Party Express."

While browsing either site, be prepared for loud noises, from chainsaw and pyrotechnic sound effects to a blaring, constant rendition of "The Battle Hymn of the Republic" to Nosak babbling immutably about being born on Flag Day.