An eBook is, as you might expect, a book that has either been written entirely in an e-mail client or written in the normal fashion (one hand on a typewriter, the other on a handgun pressed against the author's temple, left foot on the clutch, right foot on the gas) then electrified with something that looks like the machine from Honey I Shrunk The Kids.

Now that J.K. Rowling has reluctantly agreed to release the Harry Potter series in eBook format and there are television commercials for reading devices, eBooks are actual things.

There are two types of eBook reader displays, E Ink and LCD.

Because it doesn't use backlight, E Ink is essentially a very advanced Etch-A-Sketch that somehow recreates the effect of looking at print on paper without using twiddly knobs or radioactive sand. This, in addition to the fact that the screen only uses power while turning a page, means that a fully-charged battery will last for more than a week of continuous use. Possibly less if you have a large collection of eFlip Books.

LCD screens create more eyestrain, drain batteries at an exponentially faster rate, and don't resemble real books in the slightest. The iPad, however, is a portable Apple product, so most people won't care.

If you do decide to go with a dedicated E Ink reader, your best options are Amazon's Kindle and the Barnes & Noble Nook. Choosing the right one comes down to figuring which features are most important to you.

Do not seek out anyone's opinion while searching for new books. You will have a hundred percent chance of running into one of the two most insufferable types of book snobs.

Booksnob Alpha only reads scientific, historical, and mathematical reference books and goes out of his or her way to let absolutely everyone know about it. Ask Booksnob Alpha for a recommendation, and in the best case scenario they might admit that they tried to read fiction once, but couldn't get very far because they kept thinking about how much time they were wasting on things that weren't real.

Booksnob Beta only reads fiction by Proust, Nabokov, and occasionally something trashy such as Pynchon or Shakespeare. In their mind, it is impossible for a person to read Lolita and an 800-page sci-fi/fantasy book and enjoy both for entirely different reasons. There can only be the literary greats. Anyone that strays too far must be mocked.

So where do you turn for new reading material? I suggest waiting a few weeks for the release of my first novel: 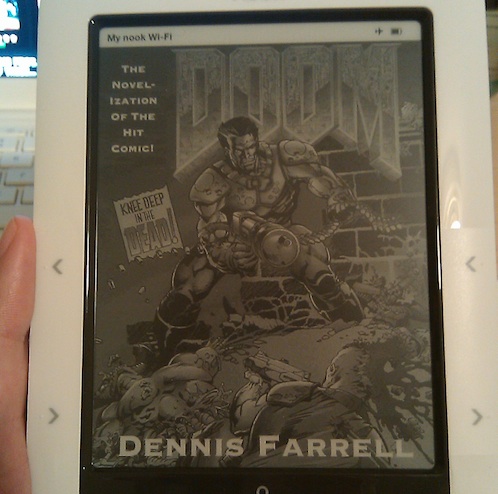 Adjusting to an eBook reader isn't all that difficult, but to make the transition easier keep the following in mind: